Oh No! My Dog Just Ate Raisins! Are They Toxic? What Should I Do Now?

If your dog just ate raisins, the first thing you should do is contact your local veterinarian or emergency veterinary clinic right away. Veterinarian Joanna Woodnutt examines what you can expect, and why these dried fruits are so toxic for our canine companions. 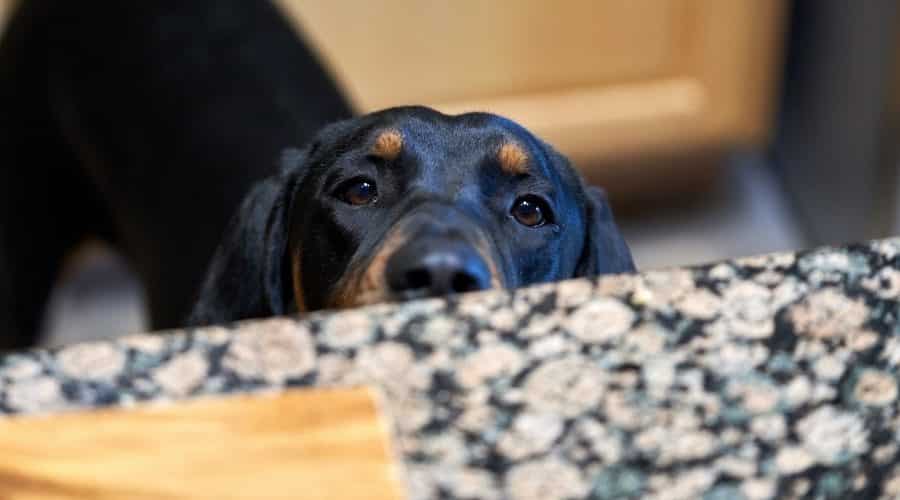 This article was written by a veterinarian, but it should not substitute as contact with a trained professional. If your dog ate raisins and is reacting adversely, contact your local veterinarian immediately.

Whether your toddler dropped raisins on the floor or you’re deciding whether to use them as a training snack, it’s important to know that raisins are toxic to dogs. Raisins are dried grapes, which are also toxic to our canine companions in their original fruit form.

If your pup’s managed to pick some off your counter while you weren’t looking, this is something to take very seriously and will likely require veterinary intervention. The extent of the harm will depend on many variables, so it’s important to consult with your vet.

In this article, we’ll look at why raisins are considered toxic, just how toxic they are, and what you should do if your dog ate raisins. We’ll also look at what you can expect, once you contact or visit your local veterinarian.

Raisins, sultanas, and currants are naturally dried grapes. All of these, along with seeded and non-seeded grapes, are a concern if ingested as they have the potential to be fatally toxic to your dog.

Raisins are abundant in snack foods, and they are commonly found in products, such as cereals, granola, protein or cereal bars, oatmeal, cookies, flapjacks, malt or raisin bread, trail, and dried fruit mixes, as well as several kids’ snacks. While grapes are also toxic to dogs, grape juice, grape jelly, and grape extract are usually not as much of a concern.

What Do We Know About Raisin Toxicity?

Until recently, raisin toxicity has been poorly understood. It was discovered in the 1980s when the first computerized toxicity database started to show a trend of renal failure in dogs that had eaten grapes or raisins.

Once the connection had been made, cases flooded in, but vets were still left struggling to understand just why raisins are so toxic to dogs – and how to predict which dogs would be affected.

There have been suggestions over the last 20 years that a mycotoxin (produced by molds) or a salicylate acid found in grapes and raisins could be responsible for the toxicity. However, tartaric acid is now suspected to be a more likely underlying cause of the toxicity.

Links were identified by a clever emergency veterinarian following a dog that suffered vomiting and acute renal failure (similar clinical signs to those seen in raisin toxicity cases) following ingestion of homemade playdough.

With the help of members of the Animal Poison Control Centre (APCC), this has been investigated further. Two common components found in both homemade playdough and grapes were identified as potassium bitartrate and potassium salt of tartaric acid (cream of tartar).

Due to a broad tolerance and safety window seen in people, this component was previously overlooked as the possible toxin. Further investigations are ongoing, but knowing what makes raisins so toxic to dogs is the first step in developing better protocols for poisoning cases.

What Happens When Dogs Eat Raisins?

Vomiting is the first common symptom seen in the initial 24 hours following raisin ingestion. Other gastrointestinal signs such as diarrhea and poor appetite may also be seen.

More serious signs, which may indicate kidney damage, may take up to 48 hours to develop. These include prolonged vomiting, lack of appetite, lethargy, excessive thirst and urination, abdominal pain, and bad breath.

As exposure to the poison continues, your dog may become less responsive, stop producing urine, and have difficulties controlling its blood pressure.

Other symptoms of raisin poisoning include:

It is important to note that the early presenting symptoms can occur with many different diseases. This means you don’t know if raisins were ingested, it can be quite difficult to predict the outcome. This may impact your vet’s ability to diagnose your pup and begin the correct treatment. Please consider all food that’s been eaten and possible toxin exposure when discussing the situation with your veterinarian.

Kidney damage causing kidney failure is the biggest concern. This can occur following ingestion of even a small amount of raisins. The kidneys are vital at eliminating a number of the body’s toxins as well as controlling circulating blood pressure, so damage is serious.

Acute kidney injury caused by raisin toxicity can sometimes be managed and clinical signs reversed, but the prognosis may be guarded as the kidneys cannot repair themselves.

How Many Raisins Will Harm a Dog?

Unfortunately, there is no established toxic dose for raisin poisoning in dogs as The signs can be variable and unpredictable. Some dogs appear to be more ‘sensitive’ than others to raisin poisoning. And the condition can be highly variable.

While bigger dogs can usually withstand larger amounts of other toxic foods, it’s not the same with raisins. Even one raisin can have a negative impact on a dog as large as an English Mastiff. This means that vets have to take any raisin intake seriously in a dog, regardless of whether they’ve eaten them previously and survived.

My Dog Ate Raisins: What Now?

Be prepared to tell them the breed and size of your dog, the type of raisins or grapes they have eaten, and approximately how many they may have taken. You’ll also need to tell them whether or not you are 100% sure raisins were consumed, or if you notice signs of toxicity. They will be able to advise you on best how to proceed based on your circumstances.

Your veterinarian will make an assessment as to the best course of action. If your dog has eaten raisins in the last 4-6 hours, your veterinarian may suggest making them sick. Never force your pup to vomit after eating raisins unless you have been instructed to do so by your vet.

It’s more likely that your vet will recommend an appointment so your pup can be sick safely, and so they can administer other treatment. Be sure to follow your vet’s instructions to ensure the best outcome for your pet.

What Will My Veterinarian Do?

The first thing your vet will do is called ‘decontamination.’ This involves trying to reduce the amount of toxin available for your dog to absorb. If your pup has not vomited, your veterinarian can give an injection to cause vomiting. This will help remove as many raisins as possible. Your vet might also give your dog some activated charcoal. Activated charcoal binds to the toxin and prevents a dog’s body from absorbing it.

If you’re confident that all the raisins eaten were removed, no further treatment may be required. It may be recommended that you bring Fido back to the vet for a blood test. This will help monitor kidney function in a day or two.

However, if it is not thought the toxin has been completely eliminated (because an unknown amount was eaten, or some may already have been absorbed), your dog may need to be hospitalized for blood tests and a fluid ‘drip’ (intravenous fluids) to support the kidneys.

Monitoring kidney function can be done with daily blood samples, as well as monitoring urine output and blood pressure. Symptoms such as vomiting, nausea, and abdominal pain can also be controlled with supportive medication administered by your veterinarian.

Will My Dog Be OK?

If you see your dog eat raisins and get treatment quickly, he is likely to have a very good prognosis. However, dogs that end up with symptoms of kidney damage have a poorer prognosis. In this case, your vet may advise that you consider euthanasia to prevent suffering.

In one early study, 50% of dogs with symptoms died after raisin poisoning. However, treatment has improved, and one study suggested that three-quarters of dogs survived even if they had symptoms after eating raisins.

Raisins and grapes contain naturally occurring toxins for our canine companions, and ingestion should be taken seriously in all instances. Caution needs to be taken as dogs can be unpredictably sensitive to different amounts and on different occasions, even if previous exposure has been seen.

Importantly, if you act quickly, your dog is likely to make full recovery following raisin ingestion. The longer your dog is left without treatment, the higher the chance of problems.

Can Dogs Eat Prunes? Are Prunes Safe For Dogs to Eat?

Can Dogs Eat Peaches? Are Peaches Good or Bad For Dogs?

10 Reasons Your Dog is Drooling: When is it Time to Worry?