My Dog Just Ate A Dandelion! Are Dandelions Toxic To Dogs?

If your pup ran off and ate a dandelion while on a walk around your neighborhood, you may be concerned if it's toxic to them. Veterinarian Joanna Woodnutt examines if you should be concerned, and what steps you should take if your pup isn't feeling great. 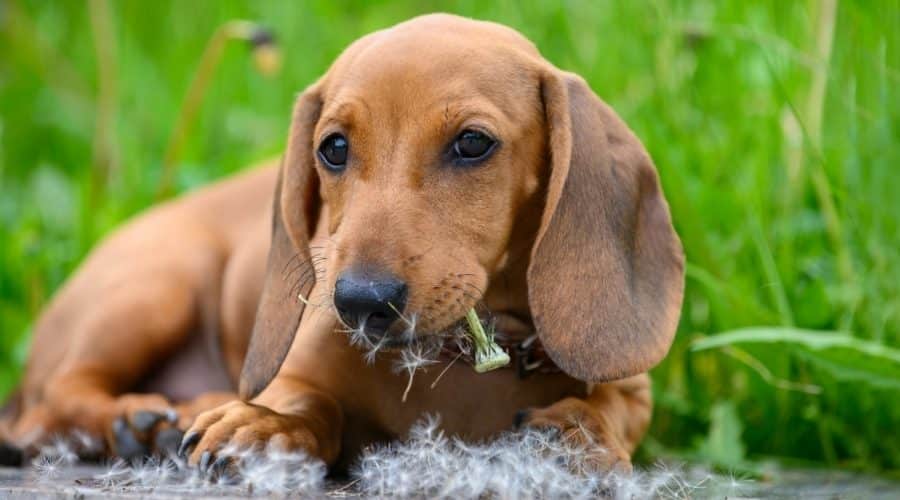 This article was written by a veterinarian, but it should not substitute as contact with a trained professional. If your dog ate dandelion and is reacting adversely, contact your local veterinarian immediately.

Have you ever seen your dog munching on a dandelion? Or eating grass where these flowers are growing? If so, you may be wondering whether or not they are safe for your pet to eat. Dogs are well known to consume things that may be somewhat harmful to them, so it’s natural to be concerned.

As it happens, Dandelions are typically safe for dogs to eat, although there are other healthier snacks available. There’s likely not much of a nutritional benefit to feeding these to your pup when there are healthier alternatives like certain fruits and vegetables.

The good news is that, unlike other plants, Dandelions aren’t toxic to your pup. It’s also important to keep in mind that many people view dandelions as weeds. That means it’s possible herbicides have been used to kill any that appear on their lawns. These weed-killing chemicals are often poisonous and could pose a risk to your pup. Let’s learn a little bit more about when to be concerned, and what you should expect.

What Is A Dandelion?

The name dandelion comes from the French meaning ‘lion’s tooth’ (dent-de-lion). They are yellow wildflowers that appear in early spring, which has a similar blooming cycle to roses. They have a single flower head on a leafless stem. The leaves of the plant usually form in a rosette pattern at ground level. These leaves attach to a root system well known for being tough and difficult to remove from lawns.

As the flowers mature, they form spherical seed heads, which are then dispersed by wind, giving them another name, ‘blowballs’. They are most commonly seen growing amongst the grass and are viewed by many people as weeds.

Are Dandelions Poisonous To Dogs?

Dandelions themselves are not toxic, and all parts of the plant and flower are safe for dogs to eat. Like petunias, they are one of the few flowers that are typically safe. This includes the seed heads that form once the flowers have matured. This means you don’t have to worry if your canine companion eats the seeds.

However, weed killers are frequently used in an attempt to rid the land of dandelions, and it is these herbicide-covered flowers that could pose a risk should Fido consume them. The majority of weed killers contain glyphosate. This chemical can be poisonous to dogs in high concentrations. However, almost all cases of poisoning in dogs occur from accidental spillages or after they have had direct access to the weed killer rather than from eating treated plant material.

It’s perfectly safe for dogs to eat dandelion flowers as long as they are clean and free from weedkillers and other possible toxins. If you aren’t sure, it’s best to avoid letting your dog eat dandelions, although it’s unlikely they would get a toxic dose of weedkiller from a single flower.

Signs of poisoning from weed killers are non-specific. They include vomiting and diarrhea, breathing problems, lethargy, and seizures. If you are concerned that weed control-covered flowers were consumed, and you notice symptoms of illness, then contact your veterinarian straight away for advice.

Lawns or areas of vegetation treated with the correct concentration of herbicide are not normally toxic to animals, including dogs. Once the herbicide has dried, the risk for toxicity is even lower. So, while not ideal, you shouldn’t worry too much if a few dandelions were consumed in an area that could have been treated with weed killer.

Can Dogs Get Sick From Eating Dandelions?

Dandelions are not poisonous to dogs. It’s also unlikely they’ll have a high enough concentration of weed killer to cause illness.

However, many dogs vomit after eating grass, which may contain dandelion leaves. This is perhaps due to the way the grass fronds ‘tickle’ the gastrointestinal tract. Some theories suggest that dogs eat grass to make themselves vomit. Although this seems less likely in the face of this study, which says that only 22% of dogs that ate grass vomited afterward.

Despite this, there is still a high proportion of dogs that vomit after eating grass. If your pup is sick after eating dandelions, it is unlikely to be the plant themselves that caused them to vomit, but they may have eaten some grass as well.

Parasites And Diseases On Lawns And Roadsides

Your dog would be very unlucky to ingest parvovirus or parasites while eating a dandelion. But it’s not impossible. This is one of the main reasons puppies should not go out until their vaccinations are complete. If your pup likes to snack on dandelions and other things along roadsides, make sure his vaccinations are up to date, and worm him regularly.

If you live in an area with lungworm (a dangerous parasite transmitted by slugs and slug slime), you should make sure your canine companion is protected with regular preventative treatments.

Are Dandelions Good For Dogs?

There is some evidence to suggest that dandelions may provide certain health benefits. Dandelion roots contain high levels of inulin which is a dietary fiber that helps to regulate blood sugar levels.

It may also play a part in reducing constipation by increasing movement throughout the gastrointestinal tract. Some research has suggested that dandelion roots in particular may help to stimulate the release of bile from the gall bladder and in turn, aid healthy digestion.

Dandelion leaves are packed with nutrients such as potassium, iron, calcium, and vitamins A, C, D, and K, as well as several B vitamins. They are also a natural diuretic which means they encourage the elimination of urine from the body. If your pup is already receiving a diuretic medication for a health condition and he regularly eats a lot of dandelions, then consult your veterinarian for further advice.

Dandelion leaves are also thought to be a ‘bitter tonic.’ Historically, bitter greens eaten before a meal are thought to aid digestion by stimulating the secretion of digestive juices including saliva and stomach acids.

For these reasons, there are several dandelion-based supplements available commercially for humans. But these supplements are typically not recommended for canines. Some studies would say that their effectiveness is unproven. You should always consult your veterinarian before intentionally supplementing your dog’s diet with dandelion.

How Do I Stop My Dog From Eating Them?

If your dog has a habit of munching on dandelions and you know they have not been treated with weed killer, then don’t worry about trying to stop him. However, it might be a good idea to teach them the command ‘leave it’ so you can stop them from eating any plants that might be dangerous.

Always train by using positive reinforcement. Rewarding him when he comes away from the undesired plant, rather than punishing him when he tries to eat it.

Are dandelions poisonous for dogs?

No, dandelions are not poisonous to dogs. They could pose a risk if they have been treated with weed killers like Roundup, although even this risk is very low unless they have eaten a huge amount.

Are there poisonous dandelion look-alikes?

There is a plant that looks very similar to dandelion called the false dandelion (sometimes known as cat’s ear or flat weed). It can be toxic to horses that graze on large amounts of it but there are no known cases of toxicity in dogs.

Are dandelions good for dogs?

Dandelions do contain lots of vitamins, minerals, and fiber. This means they may even provide some health benefits. However, scientific evidence of a benefit is currently lacking. Always consult your veterinarian before supplementing your dog’s diet with anything new.

Why does my dog eat dandelions?

A lot of dogs seem to enjoy munching on dandelions although there is no solid evidence to tell us why. Dogs likely eat dandelions for the same reasons they eat grass; it aids digestion and is a natural thing for them to do. For some dogs, it is probably just an enjoyable habit.

Can I give my dog dandelion root tea?

Dandelions are not poisonous to dogs, even if they were to eat a large amount. Care should be taken to prevent your dog from eating plants that may have been treated with weed killers. But unless they consume a large number of treated plants, they are unlikely to suffer any ill effects.

If Fido enjoys the occasional dandelion as a snack, and you know that it has not been treated with chemicals, then don’t worry about trying to stop him. It is even possible that eating dandelions may provide your pet with extra vitamins, minerals, and other nutrients! However, never intentionally feed your dog a large quantity of dandelion, or supplement his diet, without first consulting your veterinarian and checking that it is safe to do so.

I have a 7 month old chow puppy was ok yesterday today he threw up twice and hasn't eaten anything. First te he threw up was dandelion's in it? Should I be concerned?

Excellent website! I have a 5-month-old pup Cuddles and your site has helped immensely.

Thanks, Nancy! I'm so glad you found what you needed and appreciate your kind words!

Can Dogs Eat Peaches? Are Peaches Good Or Bad For Dogs?

10 Reasons Your Dog is Drooling: When Is It Time to Worry?