My Dog Just Ate a Cornflower! Are Cornflowers Safe, or Toxic To Dogs?

Cornflowers are beautiful flowers that many amateur gardeners and yard enthusiasts may plant around their yard. But does this make them canine-friendly? Veterinarian Joanna Woodnutt examines if you should be concerned if your dog ate a cornflower, what to watch for, and when to call the vet. 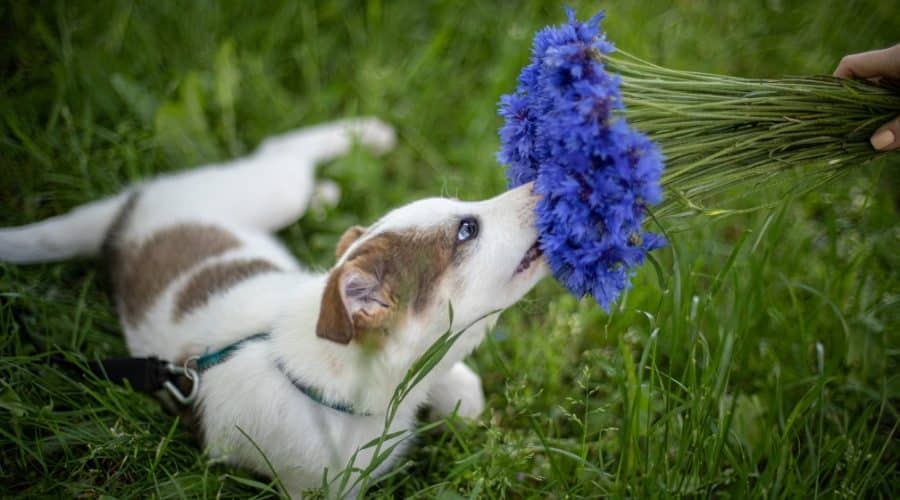 This article was written by a veterinarian, but it should not substitute as contact with a trained professional. If your dog ate cornflowers and is reacting adversely, contact your local veterinarian immediately.

Did your dog just eat a cornflower while out on a walk, or while strolling through your backyard? It’s not uncommon for our canine companions to eat things they shouldn’t. This often happens with plants or many different foreign objects.

If you’re lucky enough to live near a field with cornflowers, your dog might help himself to a tasty snack. But that could leave you wondering if cornflowers are safe for dogs to eat or whether your pup will suffer any lasting after-effects.

In this article, we look at what to watch for if your dog ate cornflowers. You’ll learn what happens if Fido has eaten too many, and when it’s time to make a phone call to your veterinarian. Let’s jump in.

Cornflowers (Centurea cyanus) are a common field-edge wildflower also known as ‘Bachelor’s Buttons’ and ‘Bluebottle.’ The wild versions are usually bright blue, but pink and white versions are available and are often grown by commercial flower farmers for their lovely colors.

The flowers look a little like tiny thistles. Although their leaves are not covered in spines or hairs and are far slimmer. You’ll also see them included in wildflower mixes, so they’re becoming more common in verges, parks, and gardens.

If your pup has eaten a cornflower, it’s important to make sure of the identification of the plant. While there aren’t many true-blue flowers, there are a couple of lookalikes that may also have escaped from gardens or flower farms.

Nigella damascene (Love-in-a-mist) has fine, ferny foliage. While it has no reported toxicity, it’s not listed as safe, either. Borago officinalis, or borage, also has blue flowers, but these are star-shaped, and the leaves are broad. However, it can cause vomiting and salivation if eaten, so double-check that your pup has definitely eaten cornflower, not borage.

Another plant that commonly gets confused with cornflower is coneflower – not because they look alike, but because the names sound so similar. Coneflower (Echinacea) plants are tall, with large, daisy-like flowers in purple, white, or a range of other colors. Unlike daisies, whose petals face upward, the coneflower petals droop downwards, giving it the name.

Are Cornflowers Poisonous to Dogs?

The ASPCA lists cornflowers as non-toxic to dogs (and cats – although the Pet Poison Helpline lists it as toxic to cats), and it even makes it onto lists of dog-safe plants. However, eating any sort of plant material can cause vomiting due to irritation of the stomach, so you may see some stomach upset.

Cornflower joins other pet-safe plants that are fine to have around your garden. Some of these include Petunias, Sunflowers, and Lilacs.

Chemicals on the Cornflower

You should also be aware of any chemicals that may have been used on the land. While most wildflower meadows are fairly chemical-free, wild cornflowers growing at the edges of fields may be subject to herbicide and pesticide drifts. While these should be very small amounts, it’s worth being aware of signs related to weedkiller and pesticide poisoning in dogs.

My Dog Ate a Cornflower: What Now?

If Fido ate some cornflower, you don’t need to panic. Cornflowers are not toxic to dogs. Here’s a step-by-step checklist to make sure there’s nothing to worry about.

Stop your dog from eating the plant, and check them over – are they drooling, or is their mouth irritated? You may need to separate Fido from the plant by securing them in another room or area that’s free of the plant.

Step #2: Analyze What Was Consumed

Look for the evidence – what is it they were eating? If you’re sure it’s a cornflower, great. But it’s worth checking other similar-looking plants. You want to make sure there’s nothing else it could be.

Check the surrounding area to make sure it was only cornflower that was consumed. These are often part of a wildflower mix and might be growing close to other, more toxic plants.

If you know it was only cornflowers ingested and Fido’s not showing any signs, you can take him home to monitor him. Keep an eye on him for 24 hours in case he develops after-effects. Irritation could come from the fiber or from the plant. Unfortunately, there’s no way of telling whether any chemicals were recently used in the area. You should also keep an eye out for signs of weedkiller and pesticide toxicity.

Step #5: When in Question, Always Call Your Veterinarian

If Fido starts to vomit, it’s likely to be short-lived and mild. Offer food little and often, but don’t be surprised if he doesn’t want it immediately. If he continues to vomit, can’t keep food or water down, becomes lethargic, or develops other signs, you’ll need to visit the vet.

Will My Dog Be OK?

Cornflowers are thought to be non-toxic to dogs, so most dogs will be fine after eating cornflowers. However, occasionally dogs will develop vomiting or diarrhea. This can happen due to the amount of fiber they’ve consumed. It can also happen due to the strands of plant material irritate their intestines. This vomiting and diarrhea is usually mild and stops quickly. But, you should contact your vet if your pup displays other symptoms, doesn’t stop vomiting, or becomes lethargic.

If the bachelor’s buttons had been sprayed with weedkiller or pesticide, you may see other signs, including sores, itchy skin, strained breathing, restlessness, or in serious cases, seizures. While it’s unlikely your canine companion will ingest enough poison to become seriously ill, it’s something to bear in mind, as herbicides and pesticides are much more toxic than cornflowers. I

If Fido has eaten a plant that you know has had chemicals applied, phone your veterinarian or the pet poison helpline for advice as soon as possible. If you aren’t sure, it’s ok to monitor at home, but be prepared to act if he becomes ill.

While cornflowers are unlikely to do any harm, it’s still not a good idea to encourage eating them. Try to fence off areas of the garden, especially when your pup is young and inquisitive or after applying weedkiller or chemical pesticides.

Teach Him to ‘Leave It’

You should also teach your dog a good ‘leave it’ command, which is useful in emergencies. To do this, offer your dog an unexciting treat, such as a piece of his usual kibble, in a closed hand. It’s likely your dog will sniff your hand, then eventually back off in confusion. As soon as he moves away, mark the behavior with a clicker or a ‘good boy.’ Then reward him with a better treat from your other hand.

Repeat this until he ignores the treat in the closed hand. Then add in the command word ‘leave it’ each time. You can then put the unexciting treat on the floor, saying ‘leave it.’ Then, reward your dog for ignoring or moving away from the treat.

Once this is reliable, try using more tasty treats as the decoy until you can get him to move away from anything you ask him to leave. Don’t forget to practice outside and in different situations so that he remembers what to do.

Cornflowers are not known to be toxic to dogs, so if Fido has eaten a cornflower, you likely don’t need to worry. However, they can still cause vomiting and diarrhea, just like any plant.

If your dog has eaten cornflowers, double-check you’ve correctly identified the plant, then monitor him at home for signs of trouble. Most dogs grow out of eating everything in sight, but if you have a Labrador or similarly greedy breed, you may find you have to block access to your garden plants to prevent them from eating too many.

Oh No! My Dog Just Ate Hyacinths! Are Hyacinths Poisonous To Dogs?

My Dog Just Ate a Dandelion! Are Dandelions Toxic To Dogs?

Yikes! My Dog Just Ate Some Tulips! Are They Toxic? What Should I Do?

My Dog Just Ate an Orchid! Are Orchids Toxic To Dogs?