Although not native to Australia, the Dingo is one of its most famous animals. Read about this fascinating relative of dogs and wolves. 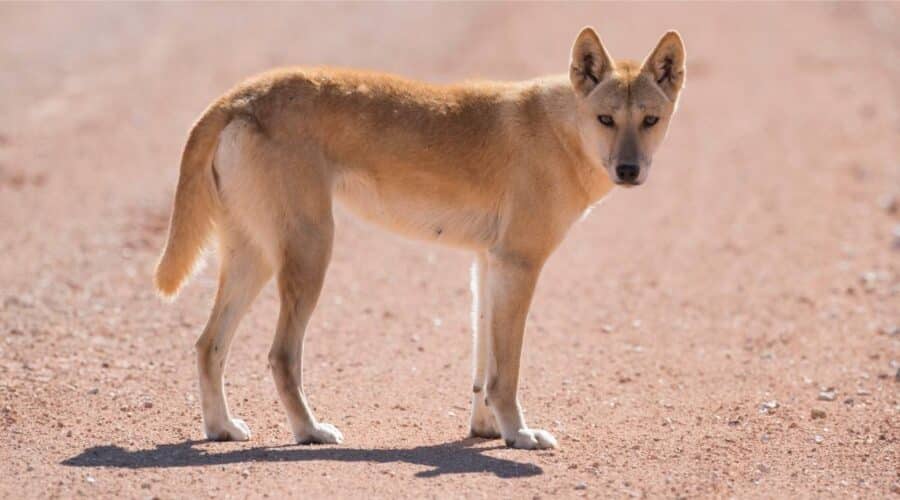 Suppose you were a fan of the TV sitcom Seinfeld. In that case, you might have seen the episode in which Elaine, listening to a woman repeatedly referring to losing her fiance at a party and then calling him baby, feigns an Australian accent and tells her, “Maybe the Dingoes ate your baby.” The reference is from a famous case where a couple who were camping with their infant daughter told authorities their child had been taken and killed by a Dingo. Although evidence at the time of the crime sent this Australian mother to jail for murder, later evidence found at the scene of a hiker’s death suggested their story was true all along. A search party located the infant’s jacket near a Dingo lair, and her mother was acquitted of the baby’s death.

Although the phrase from this tragic event has now become part of pop culture, it reminds us that Dingoes are not just feral dogs. They are a wild species that have been evolving in their environment for thousands of years. Although individuals have adopted Dingoes as their own, they are not as quickly bonded to humans as the dog, Canis familiaris. Wild animals are dangerous, and bringing one into your home may have unintended consequences. In his environment, there aren’t many predators willing to take on a Dingo. Although they are shy and typically avoid human beings, they can pose a threat depending on the circumstances.

Dingoes are synonymous with Australia, although they are not native to the continent. They have inhabited the area long enough to have displaced a previous top predator, the thylacine, and were responsible for the thylacine’s disappearance from mainland Australia. They have also been blamed for the decline of the Tasmanian Devil.

Current research suggests Dingoes have only been in Australia for about 3,500 years. Although Dingoes were familiar to the Aboriginal populations of Australia, the first sighting recorded by a Western source of Aborigines with canids was in 1623. These early explorers erroneously assumed that Dingoes had been brought to Australia by the Aborigines. The commonly used name, Canis dingo, was proposed in 1793 based on a paper and description, not a first-hand observation of the animal. The name was ratified in 1957 by the International Commission of Zoological Nomenclature.

Without a formal proposal, scientists used the names Canis lupus familiaris and Canis familiaris dingo for the species. There has been a recent proposal to define the original term Canis dingo or Canis lupus dingo using pre-1900 standards when Dingoes were unlikely to be hybridized with dogs. Despite many decades of observations of Dingoes, there’s still no complete agreement on exactly what a Dingo is.

Some experts believe that the Dingo, the “wild dog” of Australia, is a subspecies of semi-domesticated dogs that went feral after being brought to Australia. Studies have been done to determine the genetic origins of the Dingo. Some evidence that the Dingo may have had historical ties with humans in Australia is canid burial. Canids were being buried in many parts of the world before Dingoes reached Australia, but there is evidence of Dingoes being interred by humans in the same manner as dogs. Some of the burials are like that of Aboriginal humans, suggesting, if not domestication of the Dingo, at least a close relationship between the human and Dingo.

Dingoes are not domesticated dogs but a separate lineage. Domestic dogs are Canis familiaris. Although there are variations within the species, Dingoes typically are cautious and easily frightened, preferring to avoid unknown threats rather than fight them. Dingoes typically hunt as single predators. They are sensitive to small changes in their surroundings and have a social hierarchy led by an Alpha pair which typically bond for life.

Dingoes live in social groups, including the pair, their offspring from the current year, and those from the previous year. Once pups mature, they leave the family unit to find new territory and start their packs. Unrelated Dingoes occasionally come together to form a large group to hunt more sizable prey.

Dingoes are approximately twelve to thirteen inches tall. They are between thirty to fifty pounds, so they’re not huge canids, although they have some features that make them seem more menacing than regular dogs. The Dingo’s jaws can open excessively wide and have more prominent teeth than a similarly sized dog. They are more flexible than typical dogs, able to rotate their wrists and subluxate their hips. They are particularly good climbers, being double-jointed, and their necks can turn 180 degrees.

Dingoes not only have a distinctive appearance but a distinctive sound. Instead of barking, they sound more like a Basenji or a wolf. They have an array of howling sounds they make and are sometimes referred to as “singing dogs.” Dingoes have a more acute sense of smell than typical dogs and an ability to smell water underground.

Conservationists tried eliminating impure Dingo/dog hybrids and considered other coat colors to result from Dingoes interbreeding with domesticated dogs. People trying to help the Dingo by preserving the original genetics culled many individuals based on color alone. They may have culled these in error. Current coat colors vary by habitat. While most Dingoes are ginger with white, Dingoes with yellow coats live along the coast, while sable and black inhabit heavily forested areas. In alpine regions, Dingoes may be white or cream.

Because Dingoes are a wild breed of canid, they need to move. Dingoes are highly mobile and may cover six to twelve miles per day. Their territories vary from four to forty-four square miles. Although Australian Aboriginal people sometimes captured and tamed Dingoes, these canids are not suited to the typical family environment. As relatives of the wolf, Dingoes are used to living in a small pack and naturally respect the hierarchy in the pack. Although taken as pups and tamed to be companions, Dingoes may leave their owners as they reach sexual maturity. They require continuous retraining and re-taming to remain companions.

Skilled dog handlers may be able to tame Dingoes, but Dingoes are natural predators. Their unreliability around other small furry pets and the need for movement would make it difficult for anyone to keep a Dingo as a house pet. They aren’t designed for a sedentary lifestyle. Even in their native Australia, Dingoes are illegal as pets in some areas. Because they are not a dog but instead another type of domesticated canid that is as close to a wolf as a dog, they are independent and have a high prey drive. Training a Dingo takes patience, benefits from food as a reward, and requires a trainer who can present as an alpha without being physically aggressive. The bottom line is that a regular dog is a more appropriate choice for most people than a Dingo.

Larger predators such as crocodiles, jackals, or birds of prey may take young Dingoes. When natural prey is scarce, Dingoes may prey on calves and other smaller livestock. By 1885, the Australian government had erected a Dingo fence that ran 3,488 miles to keep Dingoes away from livestock herds. The wall reduced the natural range of the Dingo and hurt their numbers. Today Dingoes face an even more significant threat to their existence through the dilution of the gene pool from hybridization with domesticated dogs.

Conservationists have attempted to eliminate Dingo/dog hybrids from the wild breeding pool to preserve the species. Unfortunately, the main criteria they used for choosing individuals to cull was coat color. They assumed that any variation in coat color from the typical ginger with white suggested Canis familiaris in the individual’s genetic history. More recent research has shown that variations in Dingo coat may reflect habitat, and these colors may have originated from interbreeding with feral dogs, but have been in the species for many generations.

In the wild, Dingoes primarily hunted wallabies and kangaroos until the introduction of the European rabbit in the 1800s. The diet of Dingoes today consists mainly of rabbits and other small rodents. The Dingo is an opportunist and will eat what it can catch, including small to medium-sized feral and domestic animals.

Although there are areas in Australia where Dingoes are legal to own, there are also areas where they are expressly prohibited as pets. In the United States, owning a Dingo is illegal.

Although there is a long history of Dingoes being domesticated by Aboriginal people in Australia, Dingoes are not recommended as family pets. The amount of daily exercise a Dingo naturally needs, coupled with the ephemeral nature of their domesticity, make them unsuitable for the typical household.

Dingoes are fascinating animals associated with the rugged allure of the Australian Outback. As closely related to wolves as dogs, the Dingo reminds us that the earliest canids tamed by man were essential to our evolutionary and cultural history. They also remind us how carefully we must preserve the genetics of this branch of the dog family before it is lost to dilution.

Conservation efforts today include reducing the number of feral dogs to lower the incidence of interbreeding. Dingoes on K’gari (Fraser Island) rarely interbreed with feral dogs due to their isolated location. This group of Dingoes is particularly important to conservation efforts going forward. Thankfully, organizations like the Australian Dingo Foundation work to preserve the genetic integrity of the species.