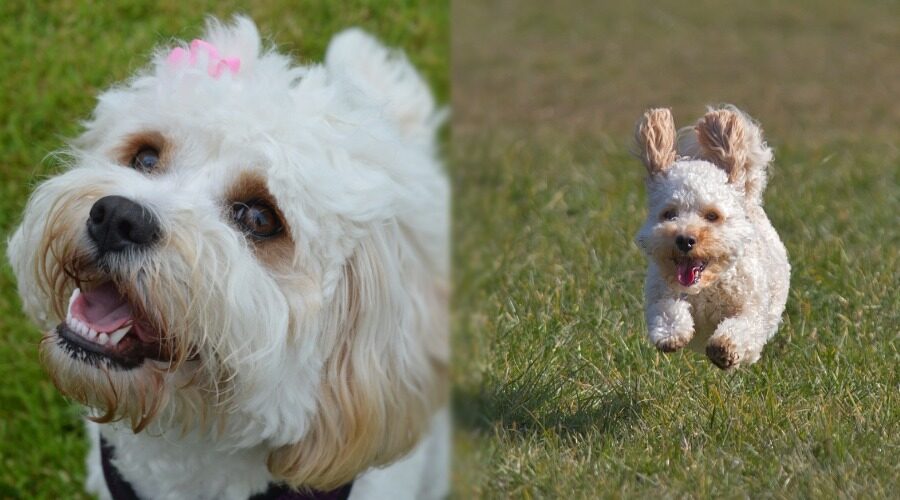 The Cavachon is a more relaxed dog, who will enjoy a snooze or two in the afternoon, whereas the Cavapoo is a much more energetic and lively pup. They look very similar, but the Cavapoo has curlier hair thanks to his Poodle parent, and this is often the easiest way to tell them apart. They both have a kind temperament, but the Cavapoo needs more mental stimulation throughout the day.

So, if you are seeking a small but seriously cute hybrid dog, then read on to find out whether the Cavachon and the Cavapoo will suit you and your lifestyle.

In order to understand these pups a little bit better it is important to look at their parent’s history too, all of which started within Royal circles across Europe.

The Cavachon is a hybrid dog, and his parents are the Bichon Frise and the Cavalier King Charles Spaniel. The Bichon Frise was once popular within rich circles, but when one Bichon Frise owner was sent to the gallows, he lost his privileged status. However, thanks to his trainability and cuteness he found employment in the Circuses and gained popularity once again.

The Cavachon is a relatively new mixed breed on the scene, believed to originate from America in the 1990s, but he is proving to be very popular across the world.

The Cavapoo is also a hybrid dog, and his parents are the Poodle (either the Toy or Miniature) and again, the Cavalier King Charles Spaniel. It is a relatively unknown doggy fact that the Poodle was originally from Germany, and was bred to hunt ducks, which is where the Cavapoo gets his energy from. But the Poodle soon became a hit in France within aristocracy circles because of his fabulous haircuts and flamboyant personality.

Similar to the Cavachon, the Cavapoo is a 90s pup, who is believed to originate from Australia, and again, he is proving to be a designer dog hit the world over.  Poodles are a popular breed to cross with other lines of purbreds as well.

There are various reasons why so many dog breeds are purposefully mixed, such as aiming for a cuter puppies or one who is more gentle, but there are two main categories. Firstly, it is believed that by combining two purebred dogs it will create a healthier pup. This process is called hybrid vigor, and despite the fact that many breeders suggest that this is a myth, it is has a scientific basis which cannot be denied.

Secondly, the other main purpose is to combine the appearance and the personality traits of two favored dogs into one canine. The Cavalier King Charles Spaniel, the Bichon Frise and the Poodle are all gorgeous small sized pups, and if you can’t decide between the two then mixing them up makes a pup who has the best of both worlds.

In the genetics world, a hybrid puppy mixed from two purebred parents, which is the case in both the Cavapoo and Cavachon, are called F1s. Generally speaking, once three generations of F1 pups have been established, kennel clubs will start entertaining the idea that they will become a breed in their own right at some point in the future. So, one day the Cavachon and the Cavapoo will likely be recognized as purebreds, but until then these guys are mixed doggos who can’t claim the purebred status.

As they are both hybrid dogs their breed standards are yet to be established, and as such their appearances wildly differ, even within the same litter. Generally, the Cavachon will have a medium length coat that is soft, silky and wavy, however some are known to have straight coats. The Cavapoo, however, thanks to his Poodle parent, has an even curlier coat, and this is often the easiest way to tell them apart. The Cavapoos coat will take 3 forms, with the fleece coat being the most common, and this is soft and silky similar to the Cavachon, and the second most common coat is the wool coat, which has much tighter curls.

The Cavachon tends to be lighter in color thanks to his white Bichon Frise parent, however he also tends to have black, tan and apricot markings sporadically across his body. The Cavapoo, however, has more of a selection of colors, and his coat can take the form of gold, black, white, tricolor (black, white and tan) or blenheim (brown and white).

They similarly have big beady dark colored eyes, which are hard to say no to! They also have the King Charles’s large floppy ears which almost reach their jawline. The rest of their features, such as their nose and paws are small, in proportion with the rest of their body.

The Cavachon and the Cavapoo are very similar, with generally one discernable difference between them. That being that the Cavachon is more of a laid back pup as both of his parents are particularly laid back, whereas the Cavapoo, with his Poodle parent, is particularly energetic and bouncy.

There are two main points to consider here, the first being that the Cavapoo is more suited to an active family, as the Poodle being a traditional working dog needs to be exercised and worked, whereas the Cavachon is happy in a more tranquil environment. Secondly, as the Cavapoo is much more energetic, it is suggested by many owners that he would suit a family with slightly older children who aren’t likely to be accidently knocked over by their bounciness.

However, they are both equally cuddly and affectionate with their immediate family, and they are smaller dogs who can comfortably fit on his master’s lap. They are also great with other pets, which is great if you are a multi-pet household (of course, this is reliant on the pup being well socialized as a pup). They are both good all-rounders, who are very adaptable to whatever environment that they are placed in, be that an apartment or a large country manor.

They are also both extremely sociable, and love to get stuck in with family games. However, with this awesome trait comes a negative one, in that they are known to suffer considerably with separation anxiety, and neither do well in a lonely household. Again, it is important to consider whether someone in the family can spend most of the day with them, because despite their angelic faces, they will start munching your furniture if they become anxious and restless.

The Cavapoo is much more energetic than the Cavachon, and so as a medium energy dog he will need around 30 to 60 minutes of exercise a day, and he will also need mental stimulation throughout his day to stop him from becoming too bored. The Cavachon, however, is a low energy pup, who will need up to 30 minutes of exercise, and he is quite happy to snuggle and snooze for the remainder of the day.

This is a big factor if you are deciding between these two breeds, if you aren’t a particularly active family then the Cavachon would be the better suited pup, and the Cavapoo will be much happier with an active family.

Both the Cavachon and the Cavapoo are very trainable thanks to their intelligent parents, the Bichon Frise and the Poodle. They both respond well to positive reinforcement training, and as with any dog, they should be socialized early with as many other humans and animals as possible to ensure that they are confident in unfamiliar surroundings.

Of course, genetic disorders in mix-breed dogs are not eliminated entirely simply because they are mixed-breeds, so you have to expect that your pup, at some point, will experience a health issue. As they are relatively new mixed breeds there isn’t an official registry of the dogs, and as such official health tests or breed registries do not exist.

However, the Cavachon are generally known to suffer from the following:

Heart defects – a heart murmur will normally indicate that there are other diseases present, such as Mitral Valve Disease, amongst a few others.

Atopic Dermatitis – this is a common skin allergy which can become very itchy and sore for your pup.

And the Cavapoo, in addition to heart defects described above, are known to suffer from these health issues:

Hip Dysplasia – this is an abnormal formation of the hip joint, which can eventually cause arthritis.

Eye conditions – the main condition to be suffered is Progressive Retinal Atrophy, which can cause blindness.

Luxating Patella – this is characterized by a kneecap dislocation, which can be very painful.

Their shared parent, the Cavalier King Charles Spaniel, is known to develop a variety of heart diseases from an early age, and so they are both at risk from this. For this reason, it is very important for both the Cavachon and the Cavapoo to undergo regular Veterinarian checkups to ensure that their heart is in good order. Generally, they are healthy dogs who both enjoy a long lifespan.

The Cavachon and the Cavapoo will both consume, on average, 1 cup of food a day. As they both share the same parent, the Cavalier King Charles Spaniel, they are both predisposed to quick weight gain and obesity. So, be mindful of how many treats you feed them both and ensure that their food is age appropriate.

The Cavachon is slightly easier to groom, because he will only need brushing 2 to 3 times a week to keep his wavy coat healthy and manageable, whereas the Cavapoo will need brushing every day to ensure that his curls do not tangle.

The Cavalier King Charles Spaniel is not hypoallergenic. As a mixed breed it is difficult to tell what characteristics the Cavachon and the Cavapoo are going to inherit from their parent’s, so whilst they might be hypoallergenic, they also might not be. Therefore, if you are strictly after a hypoallergenic dog, then it might be a safer bet to stick to these hypoallergenic dogs.

The average price of a Cavachon puppy starts from $800, whereas the price of the Cavapoo starts from $1,200. Whilst there are no official statistics, it is suggested online that the Cavapoo is priced higher because he is in more demand, and maybe more popular, than the Cavachon.

Because both the Cavachon and the Cavapoo are cute pups who are both in high demand, they are a favorite of unscrupulous puppy mills, so it is important to thoroughly research any prospective breeder to ensure that they are both reputable and ethical.

As they are both mixed breeds, who are relatively new on the scene, their appearance, temperament and other factors may widely vary, even within the same litter mix, so it is particularly important to meet the pup to ensure that he is the one for you. So, for this reason, you should be excitedly prepared to expect the unexpected! However, as long as you are not seeking a purebred or registrable pup with kennel clubs, then you will 99.99% not be disappointed!

If you are deciding between these two dogs, then the main consideration to take into account is that the Cavapoo is much more energetic and will need more daily exercise than the Cavachon. This may not suit your lifestyle, but then it may suit you much more if you want an adventure partner! There is no right or wrong answer, and as all of their parents are equally sweet-natured pups who love to be around their family, you know that you will be in for a delightful doggo, with a worldly royal seal of approval.