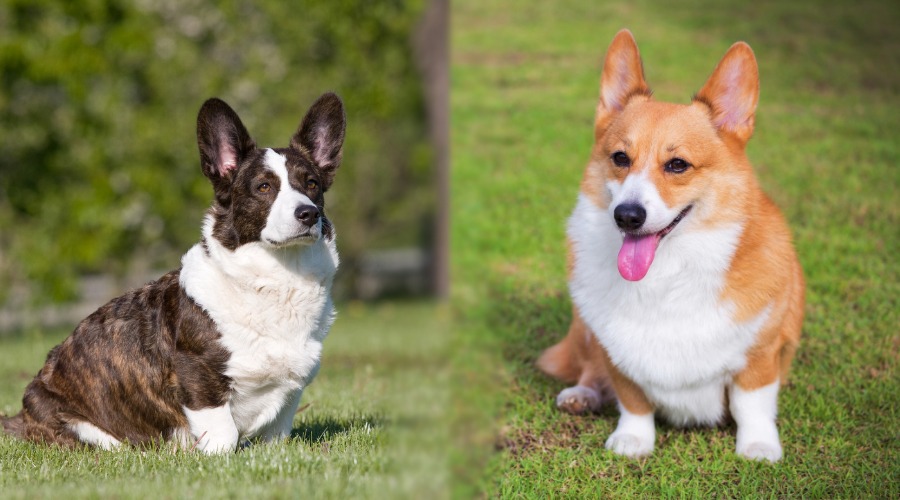 That’s right, for those of you who don’t already know, we are blessed with 2 types of Corgi! The Cardigan and the Pembroke are so similar in some ways, but slightly different in others.

They are both amazing family canines who will shower you and your whole family with affection and their fuzzy fur. The Cardigan is more of a serious pup who has stronger herding and guarding instincts than the Pembroke, and the Pembroke is more social and bouncy than the Cardigan.

The Cardigan is the original ancient Corgi, and the Pembroke is the result of breeding Finnish Spitz dogs with the Cardigan just a few Centuries ago. However, they are now officially recognized as two separate breeds. If you are desperate for a Corgi but not quite sure which one will suit you more, then read on!

The Cardigan Welsh Corgi is one of the oldest dog breeds in the world dating back to 1200 B.C. They were brought to Great Britain by Celtic warriors from central Europe. Although they were not originally from Wales, the breed settled there and was named after the well-known town of Cardigan.

The Pembroke Corgi is much newer than the Cardigan, and dates back to 1107 A.D. He was originally from Belgium and belonged to various craftsmen, who were invited to live and work in South Wales by Henry I. Along with them came their herding dogs, whom they mated with the Cardigan, and then named Pembroke, after the county that they lived in. It is believed that the original canine was of Finnish Spitz heritage.

They are each a breed in their own right, however, in the 19th Century they were often interbred which resulted in them being considered, for some time, as the same breed. However, fanciers of each breed stepped in and saved the breeds sovereignty and now they are once again separate from one another. The practice of breeding the two breeds together has been curtailed.

They made great herding animals because they are intelligent and protective. Additionally, their small size means that they can budge and nip the sheep and cattle’s ankles without being tall enough to receive a kick to the head! When their herding is completed, they would sleep outside at night and keep a watchful eye over their herd, and their surprisingly loud bark would warn the intruder off, and alert their master.

The Corgi is particularly famous for 2 things. The first, and probably most famous, is that the Corgi is the Queen of England’s favorite breed, particularly the Pembroke. Although she now only owns 2 Dorgi’s, which is a Dachshund and Corgi mix, she has bred and owned over 30 Corgi’s in her lifetime. Secondly, there are 542K posts on Instagram with the tag ‘Corgi butt’, and this has increased by 24K posts within one month alone since my last Corgi article. So that’s quite a popular peach!

Out of 193 breeds recognized by the American Kennel Club (AKC), the Cardigan Corgi’s popularity is ranked at number 68, and the Pembroke Corgi beats him significantly in 13th place.  They are also a popular dog to mix with other purebreds.

Unless you know the breeds well then it can often be difficult to distinguish between the two, but according to the experts, the quickest way to tell the difference is to look at their tail and their ears. Firstly, the Cardigan has a long tail whereas the Pembroke does not, his is docked. Secondly, the Cardigan has rounded ears whereas the Pembroke has pointier ears that are more erect.

They are both short with equally short legs. They are among 19 modern dog breeds that have short legs, and it is believed that their short legs were once linked to a gene that determines dwarfism. Their name, Corgi, means ‘dwarf dog’ in the Welsh language.

Because they are both herding dogs, they both have an undercoat to keep them warm in the wet and cold Welsh weather. They are both fluffy, and their outer coat is smooth. The Pembroke’s coat only comes in 4 colors, whereas the Cardigan’s coat comes in 11 colors, but only 5 are recognized by the AKC. Similarly, they are both known to have a noticeable patch on their back where their fur changes in direction and density. Welsh legend suggests that fairies rode the Corgi, and it is often called the ‘fairy saddle’ amongst fanciers.

Despite both breeds being traditional herding canines, they are now more popular as family pets. They would both equally love an adventure in the forest just as much as spending the afternoon cuddled up on the sofa with their loved ones. They are both adaptable to their family’s lifestyle, which is why they are favored by families across the globe.

They are both equally affectionate and loving with their immediate family, and they both have a soft spot for children. They are tolerant of them and just love to be sat next to them. With that being said, as they are both original herding dogs, children must be supervised to monitor that potential herding or nipping behavior.  They are also both known to get on with other family pets and dogs, so they are great for multi-pet households, just maybe not any sheep!

Because of their love for their family they do not like being left at home on their own for long periods of time, and they do suffer with separation anxiety. This can take many forms, such as excessive barking or whining through to destructive behavior.

The Cardigan Corgi is said to be less social with outsiders and can often be quite aloof. He can be much more territorial and has retained his traditional working traits much more than the Pembroke. So, if you are after a working dog, or would prefer more of a guard dog, then the Cardigan would be your best bet!

Whereas the Pembroke Corgi is more accepting of others into their pack, and barks much less than the Cardigan. He is also much more of a class clown and is said to be very clumsy. So, if it is a less serious and sillier pooch that you are after, then the Pembroke is likely to suit you more.

Being ex-working dogs they are both medium energy, so don’t expect him to be sitting around sipping tea all day! They both require around 45 minutes of exercise a day and love a good romp around the local park or in the yard. Their ancestors would have enjoyed large fields to exercise in, and the Corgi’s of today would enjoy this just as much.

They are both surprisingly athletic and are great at agility courses, if this is something you can’t take them to often then be sure to invest in frisbees and tug of war ropes for them to expel all of that working energy. They also love treats, so a treat-filled puzzle toy would keep them entertained for a few hours for sure.

Both the Cardigan and the Pembroke, being working dogs, are easily trainable as long as you are consistent with your training. Positive reinforcement training from an early age is key to instill discipline and ensure that they follow your commands. They are food obsessed and as such treats will be the driving factor for them. Use this to your advantage but be sure to offer them plenty of verbal praise as well. Gradually reduce the number of treats over time once they have learnt the commands and desired behaviors.

Additionally, because of their herding instincts and nipping behaviors, it is imperative that you socialize them early if you want a well-mannered pup. Socialization is the process of exposing your pooch to a wide variety of daily situations, such as walking on the sidewalk comfortably, or being relaxed with dogs of all shapes and sizes, and to be calm and content. Making sure that every experience is an enjoyable one is the key to success.

Both the Corgi’s are also very independent and stubborn, and this can deter owners from being persistent with their training. Do not fear, it is probably not something that you are doing wrong, they are simply known to do things on Corgi time. The best way to counteract this is to make training sessions short and fun.

The Cardigan and the Pembroke Corgi are generally healthy dogs, but they are prone to similar health issues. The Cardigan’s life expectancy is 12 to 15 years, whereas the Pembroke is slightly less at 12 to 13 years.

They are also both prone to Intervertebral Disk Disease (IVDD), which is where the spinal discs rupture due to their long and compact spine. Preventing them from jumping from heights can help to prevent this disease from developing. Symptoms include problems with going up or down stairs, weakness in limbs or paralysis.

Both the Cardigan and the Pembroke are prone to obesity, more so than the average pooch, so be sure to monitor the number of treats that he is given. With their small frame you should do all you can to prevent them from becoming a chunky Corgi. You will never see your Corgi’s ribs, unlike some other breeds, but if you can’t feel the ribs through their fur then they are definitely overweight.

The Cardigan and the Pembroke Corgi will consume the same amount of food per day, between 1 and 1 ½ cups. If your Corgi is an active pup then he will probably need the extra ½ cup, but if he prefers the lapdog life then feed him just 1 cup. He will put on weight quickly so if you notice that he is piling on the pounds then lower his food intake.

Feeding your pup high-quality food that is packed with the best nutrients is one of the best ways to keep him in tip-top condition and away from the Veterinarian, which he will thank you for.

The Cardigan and the Pembroke have similar coats, in that they have a dense undercoat that keeps them warm, and a fluffy overcoat. As a result of this they will need brushing 2 – 3 times a week. As the months get warmer, they will begin to shed all the fur that is not needed, and there is a significant amount of fur to get rid of considering how small he is! During shedding seasons, it is best to brush him every day to keep his coat manageable for both him and your household.

Generally the Cardigan and the Pembroke will only need bathing once every two months or so. Never wash them more than every 6 weeks, as this will damage their natural coat oils.

As they are small breeds, they need more attentive dental care than the average canine, and so a brush twice a week will be suitable. They can be known to develop periodontal diseases way before old age and brushing with a doggy toothpaste will keep these issues at bay.

The price of the Cardigan and the Pembroke Corgi is about the same, at around $1,000 from a reputable breeder. If you are after a working pup from a current working bloodline, then you can expect to pay more towards $2,000.

The Pembroke Corgi has increased in popularity over recent years, so the demand for them will be undoubtedly higher, and because of this you might expect to pay slightly more for him compared to the Cardigan.

Both the cardigan welsh and pembroke welsh corgi breeds are used in other popular mixes.  Here are a few.

These feisty but cute dudes make a great family pet. They get on with all adults, children, dogs and other animals alike, and they are very affectionate with their immediate family. The Cardigan is more suspicious of outsiders, and barks a lot more than the Pembroke, whereas the Pembroke is more spunky and a bit of a goofball.

So, whichever Corgi you decide to choose, know that you are in for a right royal treat!