Are you trying to decide between a Cane Corso vs. a German Shepherd for your next furry friend? Both breeds are quite protective and have genetically honed guardian instincts. Find out which breed makes a better companion for your lifestyle. 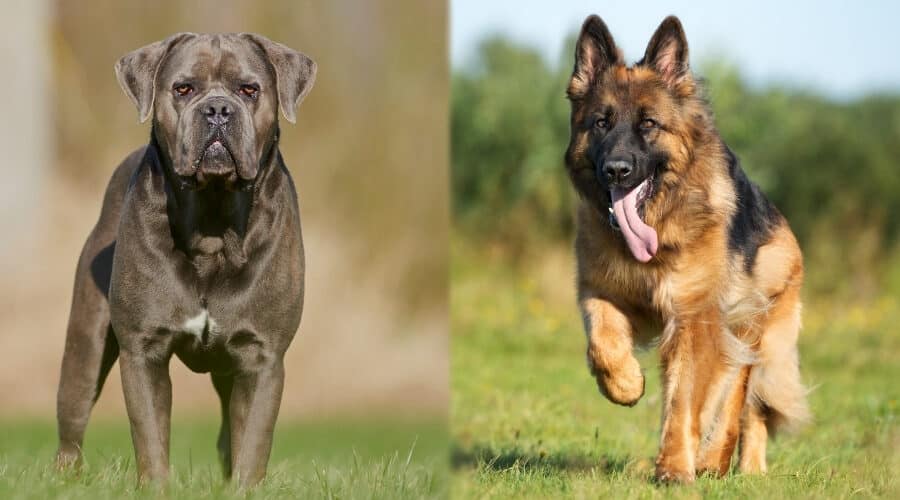 Comparing the Cane Corso vs. German Shepherd for your next home guardian? Both dog breeds can make excellent family protectors, provided they are supplied with the right training and socialization early on. Both breeds have distinct differences in which areas they excel, based on what they were bred for.

However, if someone asked you which dog makes the best protection canine, which would you choose? Is one better than the other? Perhaps you’re curious about which one of these pups makes the better canine companion for families that have children? Or if you have several pets? Here in this breed comparison guide, we will discover all of this, and much more.

The Cane Corso and the German Shepherd are both big dogs, and neither are suited to meek and mild owners. But if you are stuck choosing between these canines, thankfully, there are a handful of differences between them to help you decide. Let’s jump straight into all the doggy differences.

Looking into a dog’s past can tell you about what they will be like as family pets. Their breed purpose often determines what their personality and energy needs are like, so it should always be a part of your research.

The Cane Corso, pronounced as ‘Kay-nah Kor-so,’ is also known as the Italian Mastiff. His ancestors were large Roman war dogs, and they were originally bred to help his master on the farm. He is a versatile dog who took on roles such as sheep herding, cattle droving, cart pulling, and protecting his family and estate. In Latin, his name translates to the ‘bodyguard dog.’

He nearly became extinct, but thanks to the Neopolitan Mastiff and breed fanciers, his depleted numbers recovered. The Cane Corsos was first introduced to the US in 1988, and ever since then, we have fallen in love with him. Despite his enormous size and formidable appearance, he is one of the quickest rising stars in the American Kennel Club popularity contest.

Because of their reputation as ardent defenders, Cane Corsos are one of the more sought-after guardian dog breeds. They are often compared to the Presa Canario and are even compared to Pitbulls for all different types of guardian duties.

The German Shepherd’s name gives away his history more so than the Cane Corso. The German Shepherd is from Germany and was bred specifically for Shepherding duties. He was created by a cavalry officer who was seeking a perfect farm dog. Much like the Cane Corso, he was a versatile working pooch who undertook many roles. Over time, humans realized just how good he was as a protector.

He is now the 2nd most popular dog in the US and the most well-known dog breed used in military and police environments. He became popular as a family pet in the early 1990s. Mainly thanks to his appearance in many television shows such as Rin-Tin-Tin. Across the world, he is also known as the Alsatian, and although some people assume they are different breeds, they are the same, unless referring to the American Alsatian.

They both have double coats to keep them warm in the winter, but that is the only similarity they share when it comes to their coat. The Cane Corso’s coat is always short but almost rough to the touch like a cow’s coat. The German Shepherd has the choice of two coats, a short coat, and a long coat, but it is soft.

The Cane Corso can sport a black, fawn, gray, or red coat color, which can also be brindle in patterning. The German Shepherd commonly wears his distinctive black and tan colored coat, with the familiar face and back markings. German Shepherds can also come in solid colors, with black coats being the most popular and frequently seen solid color.

So which breed makes the better protection dog, and which is better for families? Well, it depends on what you’re after. They both make equally good protection dogs. Not only will they both naturally guard you when there are strangers about, but you can be sure that most intruders won’t want to challenge either breed.

German Shepherds are calm and collected until they need to be otherwise. Always focused on their masters, they only protect when told to do so (or really needs to). The Cane Corso is a slightly more intimidating and overprotective dog. This is mostly due to their size and appearance.

Cane Corsos can be too much dog for many people. They are more dominant than the German Shepherd, and he needs a firm master. Unless you have experience with dominant dogs, we wouldn’t suggest that you start with the Cane Corso. The German Shepherd is much easier to handle thanks to his trainability and much less dominant.

Both breeds are wary of strangers, but loving with their families. They are both cuddly and affectionate, and you’ll find them both sharing the sofa in the evening if you allow them to. They both love children and can coexist happily alongside them. The German Shepherd will focus on his primary caregiver, whereas the Cane Corso will share his love equally.

They are both intelligent and full of working and guarding energy. This means that they are active and need mental and physical stimulation throughout the day. They will both like to play with their humans in the garden, and they both hate to be left alone. So, whichever breed you decide to pick, you’ll need to be able to spend most of your day with them.

The Cane Corso and the German Shepherd are both energetic. They are very similar when it comes to their exercise needs, and both need around 60 minutes of exercise every day. And because they are both very intelligent dogs, it’s advisable to keep them on their paws and mix up their activities. Jogging, mountain hiking, beach visits, and training sessions will keep them happy.

They both need to be physically worn out for them to relax at home. Even after one day, these pups will get restless, and neither will accept any excuses from you. If you fail to meet their needs, they will both become problematic and destructive.

Thankfully, once they have been exercised, they will both settle down for a snooze in the afternoon. But they’ll never enter deep sleep because they will keep one ear to the sky, listening out for any danger.

Both breeds need to be socialized with other animals and humans from the get-go. Otherwise, they can both become overly protective, and they’ll see everything as a threat. The training of a Cane Corso is a lifelong commitment, and he’ll need to be reminded daily how to be a polite pooch.

They are both prone to hip and elbow dysplasia, which is an abnormal formation of the joints. The German Shepherd is also prone to degenerative myelopathy, which is a progressive disease of the spinal cord and can lead to paralysis. The Cane Corso is prone to dilated cardiomyopathy, which is essentially congestive heart failure.

The Cane Corso and the German Shepherd both eat around three cups of food every day. This will depend on the dog’s size and activity levels but look at the package instructions for specific advice.

When it comes to what type of food to feed them, you should always feed them the best quality kibble that you can afford, as these will provide a well-balanced diet. When looking at dog foods, German Shepherds do better on active canine formulas. Cane Corso’s need dog food made for large or giant breeds.

Both the Cane Corso and the German Shepherd suffer from bloat. So it is advised that you feed them their daily allowance over at least 2 meals and not immediately before or after exercise. If you are thinking about welcoming one of these pups into your life, you need to make yourself aware of this life-threatening condition.

They will both need bathing once every 8 to 12 weeks to keep them smelling fresh. If the German Shepherd has longer hair, we would suggest using a conditioning shampoo, as this will help to prevent matting. When it comes to grooming, everything else is pretty much the same and similar to every other canine.

The Cane Corso is slightly more expensive than the German Shepherd. Just because he is rarer. However, if you are looking for an award-winning German Shepherd or one from a particular guarding lineage, you can expect to pay much more. So the price of a puppy depending on what you want.

Puppy mills will try to lure you in with a much lower price, but with that comes untold health issues and a poor start to life. It’s also likely that they will not have been socialized adequately. This is something that you should avoid with both of these protective breeds. Don’t be tempted to settle for a lower price because you will end up paying much more in vet bills and behavioral classes.

You could also consider rescuing, and what a wonderful thing to do! As popular breeds, you might not have to wait long for one to appear in your local rescue center. Alternatively, you can check out the Cane Corse Rescue or the American German Shepherd Rescue Association websites, where they list dedicated rescue centers state by state.

To summarize, the German Shepherd is a protective dog, but he is a little more accepting of strangers. He focuses on his primary caregiver more, but he is much more obedient and trainable compared to the Cane Corso. The Cane Corso is bigger and more dominant, and just as protective. Cane Corsos are less tolerant of strangers, and his training is a lifelong commitment.

Overall, both the Cane Corso and the German Shepherd make wonderful family pets, but they both need different types of families to be happy and healthy. It all depends on what you are looking for in a pooch and what type of dog owner you are. As long as you can commit to their individual needs, you are sure to develop a strong bond and have a happy life together.

Most Aggressive Dog Breeds: What Breeds Are Considered Dangerous?