Can dogs eat a bite of your tuna fish sandwich? Maybe. Veterinarian Emma Rogers-Smith explores the safe ways to feed it and also shares more about mercury poisoning and other possible risks associated with feeding your dog tuna. 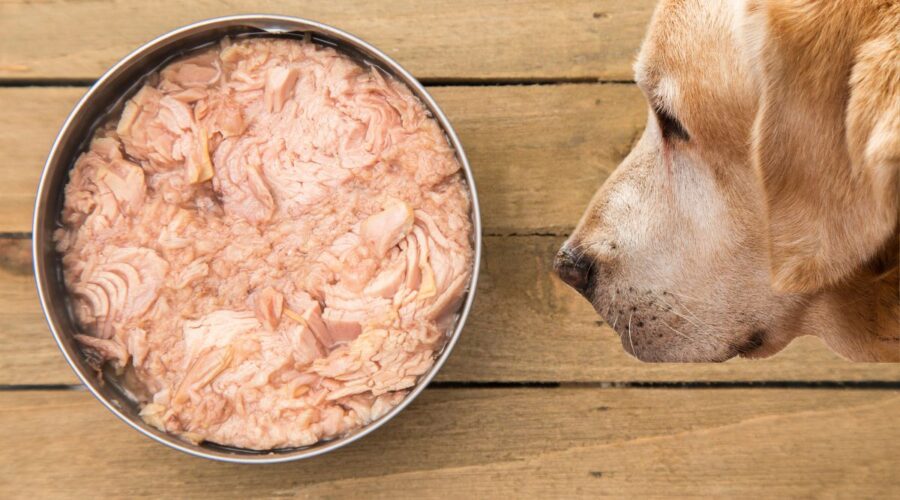 When you buy something through one of the links on our site, we may earn an affiliate commission.

Everybody knows that for us humans, including fish as part of a balanced diet has been reported to have a multitude of health benefits.

The same is true for our canine friends. Some types of fish provide an excellent source of protein and healthy fatty acids.

Since tuna, particularly in the canned form, is one of the most commonly consumed types of fish on the market, it goes without saying that many pet owners may wonder whether it is a safe addition to their pup’s diet.

This isn’t a question with a straightforward answer. Tuna can be safely fed to your adult dog, but only in very small amounts as an occasional treat. It should not form a staple component in your dog’s diet. It is important to note that tuna should not be given to pregnant bitches or young puppies. Tuna cannot be offered regularly or given to pregnant dogs or puppies because it contains mercury. Overeating tuna, or any fish that is long-lived or sits high in the food chain (like marlin, swordfish, or sharks), lead to a build-up of mercury in your dog’s body, which can lead to mercury poisoning – discussed in detail below.

What Is Mercury And Why Is It In Fish?

Mercury is a naturally occurring chemical element that we more commonly associate with the liquid metal in old-fashioned thermometers. It exists in several forms, and one of particular concern is a compound called “methylmercury.” Methylmercury is made by the action of certain kinds of microscopic organisms that live in water courses, such as lakes, rivers, and the ocean. It is found where there are sources of nutrients for living creatures in the water. Importantly, methylmercury is not readily removed from a living creature’s body once consumed, and because of this, a process called “biomagnification” of mercury occurs in the aquatic food chain.

While there is only a little mercury in the bacteria, the plankton that eats those bacteria take on more mercury, the creatures that eat the plankton consume more mercury, and so on, until you reach the large predator fish. These consume large amounts of mercury over time. In general, fish-eating fish, such as sharks, swordfish, marlin, and tuna, have higher levels of mercury in their tissues. The levels of mercury are highest in the species of predatory marine species with long life spans, such as tuna, swordfish, and whales.

Why Is Mercury A Problem?

We care so much about mercury because it’s toxic to the body, a problem for dogs and people alike. As the body cannot effectively get rid of mercury, it builds up in our tissues over time and the more mercury consumed, the higher the tissue levels become. Our dogs are generally much smaller than us, so they can tolerate lower levels of mercury than we can. Mercury builds up in tissues leading to problems such as tissue degeneration, with the brain, kidneys, and muscles being the most vulnerable.

While extremely rare, mercury toxicity can cause the following clinical signs in dogs:

Signs of toxicity do not usually occur until several weeks after being poisoned. These symptoms are not exclusive to mercury poisoning, meaning many other diseases can cause them. If your dog is showing any of these signs, or you are worried they have been poisoned, you should immediately speak to your veterinarian or their emergency provider. Your veterinarian needs to perform tests to determine the underlying reason for the problem.

What Types Of Tuna Can I Give To My Dog?

Suppose you have decided to give your dog a small amount of tuna as a treat then the next question is what type of tuna? There are several species of tuna fish. Bluefin tuna has the highest levels of mercury and should be avoided entirely. Depending on the way it has been preserved, there may be other health considerations for your pooch aside from the mercury levels.

Canned tuna with brine should not be fed to dogs (or cats). The reason for this is the high salt content, which can harm your pup.

Of the available types of canned tuna, the kind preserved in freshwater is the best option for your dog. This is because there are no additional flavorings or oils that could upset your dog’s tummy or cause unnecessary problems. Always check the label of the tuna to ensure it doesn’t contain any additional salt. Some companies add salt to improve palatability for us humans; this is not safe to give to your pup.

While a small amount of sunflower oil should not harm your pup and may even help their coat, additional fats in the diet add significant calories and can lead to tummy upsets. For this reason, avoiding tuna preserved in sunflower oil is best. Again, some of these products also have additional salt, which can harm your dog.

While adding extra herbs or spices in the cooking process can elevate food hugely for our human palate, many foodstuffs we can safely enjoy are toxic to our canine friends. For this reason, any tuna you choose to feed your dog should be prepared plain.

Different species of tuna contain higher mercury levels. Often, tuna steak is of a bluefin variety with the highest mercury levels. This should always be avoided. Tuna steaks of other types usually contain a lower mercury content. Any tuna steak should be thoroughly cooked to prevent the risk of parasite transmission. It is not appropriate to feed your dog a whole tuna steak, but a small spoonful of plain tuna steak as a treat on a rare occasion should be safe.

Tuna should never be fed to your dog raw. Unless fish is sushi-grade (which comes with a hefty price tag), it may contain parasites that can lead to severe illness.

How Much Tuna Can I Give My Dog?

No scientific studies are looking into this, and because of this, there are no medically agreed-upon guidelines for dogs. It is best to limit the amount of tuna your pet eats to a very occasional treat and only to feed a small amount at these times (think a small spoonful, not a tin). The actual amount your pet can have is affected by their body size. Smaller dogs should be fed less tuna and should have it less frequently than larger dogs.

No dog should ever be given a whole can of tuna in one go, and no dog should be fed tuna every day. If you feed your dog some tuna, allow a few weeks before giving it to them again. If unsure, it may be best to avoid feeding tuna altogether. Instead, look for dog-friendly fish-based treats or ask your veterinarian for dietary advice. If you are feeding other mercury-containing fish to your dog as a treat, do not feed them tuna as well, as this leads to higher levels of mercury build-up.

Can I Give Tuna To My Pregnant Dog?

It is not advisable to give tuna to a pregnant dog. This is because mercury can cross the placenta and lead to developmental problems in the growing puppies, especially in the brain and nervous system.

Can I Give Tuna To My Puppy?

It is not advisable to give tuna to a growing puppy. Again, this is because of the potential for mercury to cause issues with your puppy’s neurological development. The nervous system of young animals is especially vulnerable to mercury exposure.

What Other Types Of Fish Can Dogs Eat Safely?

The best types of fish to consider for your dog are those that are short-lived. Long-lived species like tuna and swordfish build up higher levels of mercury over time. Therefore, feeding short-lived fish reduces the risk of high levels of mercury accumulating in your dog’s body. Some examples include salmon, ocean whitefish, tilapia, and pollock. If you choose to feed fish to your dog, you must ensure to cook it thoroughly. Raw fish can contain parasites that can make your pup poorly, but they also can carry harmful bacteria like listeria and salmonella.

These can make your pup sick and lead to health problems for you and your family. Young children, pregnant women, and immunocompromised people are most at risk. Fish should be prepared for your dog plain, as cooking with oil or with herbs or spices can lead to health problems for your pup, especially if you use herbs such as garlic which is toxic to dogs. Make sure you remove all bones from the fish before feeding your dog, as fish bones can be hazardous and may result in an expensive and unwanted emergency room visit for your canine friend.

Giving a small amount of tuna to your adult dog is safe as an occasional treat. The best option is likely canned tuna that has been preserved in spring water. However, tuna should never be a staple in your dog’s diet and should not be given to pregnant dogs or puppies.

Mercury toxicity is very rare, but as we do not know the safe levels of mercury-containing fish to feed our domestic pets, it is best to be cautious. If your dog shows signs of toxicity, contact your veterinarian immediately.

What Is The Healthiest Dog Food?