Did your pup swipe some toast or a burger bun covered in sesame seeds? Find out in the article below if sesame seeds are safe for dogs. 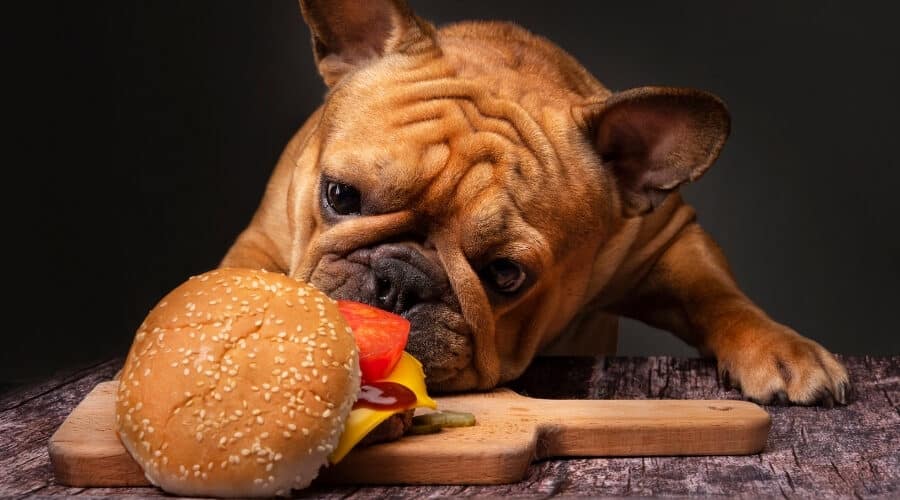 This article was written by a veterinarian, but it should not substitute as contact with a trained professional. If your dog ate sesame seeds and is reacting negatively, contact your own veterinarian right away.

Dogs are, unfortunately, prone to eating things they shouldn’t. Although I’d never put it past a Labrador, it’s pretty unlikely that most dogs will eat many sesame seeds on their own. After all, they’re usually stored in spill-proof containers in a cupboard.

But sesame seeds are hugely popular, and they’re on everything these days. From a garnish used on sticky ribs, to the toppings on buns, to a healthy salad sprinkle, it’s likely you’ve got something delicious containing sesame seeds somewhere in your house. This means it’s only a matter of time before Fido gets into something he shouldn’t, leaving you wondering what your next steps are.

So, if your dog has eaten sesame seeds, should you worry? Should you be running for the vet like you would if your pup ate chicken bones or chocolate? What steps should you take? Find out what our veterinarian contributor here at Love Your Dog has to say below.

Sesame Seeds: What Are They?

Sesame seeds are the seeds of the sesame flower, which is native to Africa and widespread in India. It’s now cultivated worldwide for the tiny seeds that lend a nutty flavor wherever they’re used- in bread, on sushi, and on prawn toasts. They pack a nutritional punch, with just 1oz containing 25% of your RDA of magnesium and iron- although you shouldn’t eat many, as they also provide 21% of your daily fat allowance.

Are They Safe For Dogs?

Yes, sesame seeds are generally considered to be safe for dogs to eat. They’re tiny, and your dog is unlikely to eat many in one sitting. Like many seeds, they are high in vitamins and minerals, but it’s not clear whether dogs can effectively digest the seeds to absorb these nutrients. There are no known cases of toxicity from dogs eating sesame seeds, so they’re not poisonous to dogs. They don’t appear to be dangerous in other ways, either. They are also too small to cause a blockage.

Can Dogs Digest Them?

Lots of sources on the internet claim that dogs cannot access the nutrients in sesame seeds due to their digestive system being optimized for plant and meat consumption. I cannot find any scientific evidence for this claim and it appears to be something a little like Chinese whispers amongst pet blogs. However, there’s no evidence that dogs can digest sesame seeds, either. Even if seeds appear to be passed relatively unchanged, that doesn’t mean that dogs have been unable to get nutrition from the seeds.

Having said this, the hard seed case, especially of the unhulled sesame seeds, is probably difficult to breakthrough. It also contains the compounds oxalates and phytates, which reduce the absorption of nutrients. If you are going to feed sesame seeds to your dog for nutritional reasons, it might make sense to break the outer layer of the seed first- usually by crushing them. Buying hulled sesame seeds reduces the oxalates and phytates, although you miss out on the nutrition in the hull. Soaking, fermenting and roasting are all options to reduce the oxalate content and make the nutrients in the sesame seeds more available to your dog.

The main concern with sesame seeds is their fat content. Some dogs can have trouble with fatty foods, especially if they’re already on a high-fat diet or have other digestive problems. A high level of fat can cause pancreatitis, a painful condition that often requires hospitalization to treat. Affected dogs usually start vomiting and lose their appetite. They may get diarrhea.

They quickly become dehydrated due to the vomiting and often need pain relief, anti-emetics, and fluids to recover. Although this would be a severe and unlikely result of eating a few sesame seeds, it’s always a risk with any fatty foods and something to consider if your dog eats a lot of seeds.

How About Sesame Seed Paste or Tahini?

Tahini is delicious. It’s rich, nutty, and oh-so-wholesome. It appears dogs agree. Tahini, or sesame seed paste, is sometimes recommended as a mixer for dogs that are picky eaters that don’t properly eat their food. I’d exercise caution with this, though. Similar to peanut butter, sesame seed paste is still very high in fat, and if your pet is already suffering from an upset stomach it could make things worse or even cause pancreatitis.

Is Sesame Oil Good For Dogs?

It’s not a good idea to let your dog eat sesame oil. Pure oils contain far too much fat for dogs to eat regularly. Sesame oil is high in calories and can quickly cause your dog to have a calorie imbalance, causing them to gain weight. In addition, the extra fat can cause some dogs to get a flare-up of pancreatitis, a painful condition that often requires hospitalization.

Do They Offer Any Health Benefits?

So Fido ate a burger bun with sesame seeds, or perhaps you are just looking for a healthy snack. The next question to answer is, are there any health benefits? Can feeding your pup sesame seeds actually provide any positive nutrients?

Some people think that sesame oil is a natural anti-inflammatory. There is a small amount of evidence that sesamin, a compound in sesame oil, has some anti-inflammatory properties. However, these results are from experiments conducted with concentrated sesamin at very high doses and currently only shown in mice- it’s unlikely that any appreciable anti-inflammatory effect will be found in dogs given normal and safe amounts of sesame seeds.

Sesame seeds are high in fiber. One tablespoon of sesame seeds contains approximately the same amount of fiber as half a small banana. Of course, a tablespoon of sesame contains far too much fat for your dog. But, a sprinkling of crushed seeds may add to their daily fiber requirement if your pup isn’t already eating a high fiber kibble. Remember, it’s not yet clear whether dogs can digest sesame seeds and gain the full nutrition of this fiber source.

Like sunflower seeds, sesame seeds are often also touted as containing lots of antioxidants. Antioxidants are compounds that prevent, correct, or reverse the damage done to cells in the body. The lignans and vitamin E in sesame seeds both function as antioxidants in your dog’s body. Studies on rats and humans have shown that eating sesame seeds increases the antioxidant activity in the blood. It’s not yet clear whether these antioxidants have the same effects in dogs.

It’s important to remember that commercial diets for dogs are complete and balanced. This means they contain every nutrient the dog needs. Vets recommend that no more than 10% of your dog’s calories come from other sources, as this can upset the balance. For instance, sesame seeds are high in calcium; too much calcium can affect the absorption of phosphorus, unbalancing the diet.

If you choose to feed sesame seeds to your dog (and remember- we don’t know if they can digest them properly) it’s a good idea to start small. As with any new food, trial a tiny amount- a half-teaspoon for a medium-sized dog- and then wait 48 hours for any adverse effects to appear. If all seems well, try giving a little more, or more frequently. Be on the lookout for any side effects, as all dogs react differently. Signs you might notice are:

Although any unexplained sign could suggest that your dog isn’t tolerating this addition to their diet. For most dogs, a half teaspoon of soaked or roasted sesame seeds twice a week is fine. Don’t forget to reduce your dog’s dietary allowance on those days to account for the extra calories in the sesame. A half teaspoon contains around 50 calories. While this doesn’t sound like a lot, it’s actually 10% of a 20lb dog’s calorie allowance!

Sesame seeds are not known to be toxic to dogs. It’s often stated that dogs can’t digest them, but there appears to be no evidence for this. It has been noted that compounds in the hull can make the nutrients hard to absorb. If you do choose to feed sesame seeds to your dog, a tiny amount of tahini or a half-teaspoon of sesame seeds is unlikely to do any harm. Just make sure you account for the calories. And if your dog accidentally got hold of some sesame seeds, they’ll probably be ok. Be on the lookout for gastric upset and signs of pancreatitis.

Can Dogs Eat Garlic? How Much Garlic is Toxic For Dogs?

Why Do Dogs Lick their Paws and How Can I Stop it?