Can Dogs Eat Pickles? Are Pickles Bad For Dogs?

So you're here because your dog ate pickles while you weren't looking, or you want to know if it's safe. We look at what happens when your dog goes pickle hunting below! 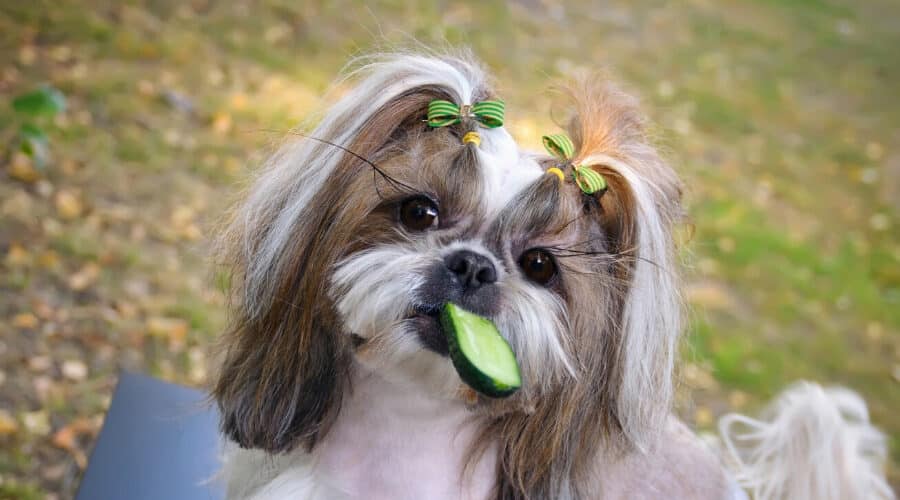 This article was written by a veterinarian, but it should not substitute as contact with a trained professional. If your dog ate pickles and is reacting adversely, contact your local vet.

Pickles are one of those love-hate foods. Some people love them, and some don’t. A ‘pickle’ in this case refers to miniature cucumbers preserved in white vinegar. They’re popular with humans, but what about with dogs? On the whole, pickles are safe for dogs to eat, but there are some caveats. Dog’s shouldn’t have too many pickles, and they shouldn’t eat some flavors of pickles. Pickles are safe if they’re plain and your dog is otherwise healthy.

The miniature cucumbers used to make pickles have bumpy skin and are a different variety from the much larger cucumbers bought raw in the shop. The cucumbers are placed into a jar with salt, vinegar, and flavorings. They are often flavored herbs but also spices and other vegetables like peppers and onions. They are a very popular snack in many countries of the world and are also sold in fast-food outlets.

Pickles are high in salt, so you should take care that your dog has plenty of access to water if you test them with you pup. Your dog shouldn’t eat too many of them or eat them too often. There other things to understand though, like if they have health benefits and if your pup eats too much. We dive into all of that below.  Let’s jump in!

Do Pickles Have Health Benefits?

Pickles can vary widely in their nutrition, as so much depends on the cucumber, when it was pickled, how it was pickled, and what it was pickled with. The ‘average’ pickle contains just 4 calories, which makes it a lower-calorie snack. It has a small amount of sugar and carbohydrate, a little fiber, and a little protein. It also has high levels of vitamins A and K. Mostly, however, the cucumber is water.

It’s very high in salt, with 283mg per pickle. That’s around 20% of the recommended daily allowance for a human! It’s a high amount for dogs, too. Most veterinarians don’t recommend your dog exceed 100mg of sodium per day, so a single pickle is three times that amount.

Some people believe that fermented pickles (and bear in mind that not all pickles are fermented) have some health benefits. This is because the bacteria that cause the fermentation are known to be probiotics in humans. However, there is no evidence that this benefits dogs at all, and it’s likely, with their different digestion- that it wouldn’t have the same effect.

Some people also claim that the vinegar that the pickles come in is healthy. This is probably because of the claimed benefits of apple cider vinegar. Pickle vinegar, however, is white vinegar and has no known health benefits.

Many cucumbers are pickled in dill. Dill is purported to have health benefits, including high levels of vitamin C and B6, as well as being a good source of calcium. However, feeding your dog pickles is an inefficient way of getting them these vitamins and minerals- far better to use the fresh herb, which has better nutritional value.

Will Pickles Make My Dog Sick?

Of course, any food that a dog isn’t used to eating could make them ill, and pickles are no exception. If your dog has never had pickles before, it may be that pickles don’t agree with them. The smell of the vinegar is quite strong for a dog’s sensitive nose, and some will eat the pickle and then vomit it up as the smell reaches the back of the nose. If your dog is sick immediately after eating a pickle but seems well in himself, it’s probably best to keep a close eye, and not to feed pickle again.

It’s also important to remember that not all pickled vegetables are safe. Pickled cucumbers are safe, but garlic, onions and chilli peppers are not. If your dog eats these as well as the pickle they could be very ill indeed. Onions contain a toxin that destroys a dog’s red blood cells, causing a haemolytic anaemia. This is slow and progressive, meaning it’s sometimes hard to spot until your dog becomes very ill.

Eating too many pickles will also make dogs sick. Whilst excess salt is usually lost from the body in urine, very high amounts can cause problems including fatal salt poisoning. If your dog is showing any signs of illness after eating pickles you should contact your vet.

Can My Dog Be Allergic?

Any dog can be allergic or intolerant to anything, but it’s quite rare for a dog to be intolerant of a pickle. However, due to the sodium content, dogs that are older or suffering with heart disease should avoid pickles. Dogs with renal failure should also avoid pickles, as these dogs are more likely to suffer with salt poisoning if they ingest too much pickle.

What Types of Pickles Are OK For Dogs?

Your dog is safest eating the regular pickle, dill pickle or Kosher dill pickle. They should not be fed pickled onions, pickled garlic, pickled peppers or some spices, so staying away from flavorings and spices is safest. Most people recommend sweet pickles, as these have a lower salt content so are likely to be less risky.

Your dog would get the same health benefits from cucumber, but with a lot less risk- so cucumber is a better snack for dogs. Other great veggies that would make a better snack include diced sweet potatoes or cubed bell peppers as a training reward.

What Pickle Spices Are Bad?

Many of the spices used to flavor pickles are safe, but some are not. Remember that onions, garlic and hot peppers are all ingredients likely to make your dog ill. Garlic salt is often added as flavoring. This contains large amounts of garlic and should also be avoided.

Other spices such as cloves and cinnamon can cause problems for dogs if given in large amounts- although the small quantities in pickles should be ok. Nutmeg is sometimes used to flavor pickles. These pickles should not be fed to dogs, as nutmeg can be toxic to dogs.

Can My Dog Have Pickle Juice?

No! Pickle juice contains all the salt, sugar and vinegar, with none of the nutrition. It’s very bad for your dog to have so much salt, and it will make your dog ill. You should keep the pickle jar well out of reach of your pet. Some people recommend pickle juice as a treatment for dehydration- the salt content can make a dehydrated dog very ill, very quickly, and even diluted this is not a suitable drink for your pet.

What’s The Best Way To Test?

If you still think you want to feed your dog the occasional pickle, a little bit every now and then probably isn’t going to do any harm. We would suggest feeding no more than a slice or two every few days. Do not give your dog whole pickles if they’re prone to gobbling their food, as it can become a choking hazard- for most dogs, a whole pickle is too much, anyway! However, it would be preferable to feed your dog small amounts of cucumber instead, as this is much healthier!

What Happens If My Dog Eats a Pickle?

If your dog steals a pickle, it’s unlikely to do any harm as a one-off. This is of course, assuming it doesn’t have any dangerous ingredients. Keep an eye on them for 24-48 hours to make sure they have no negative effects. To prevent it from happening regularly and your dog ingesting too much salt, you should keep the pickle jar out of reach and take care of your sandwiches and snacks.

So, can dog’s eat pickles? The answer is yes, but only plain pickles, and in small amounts. There are far more nutritious foods you can feed your dog, and we recommend that you limit your pup’s intake of all processed foods. Your pup shouldn’t eat processed foods meant for humans, like Macaroni and Cheese.

While some processed foods like Graham Crackers are usually OK in moderation, it’s usually far better to feed your pup natural treats. Some great examples of natural treats could be Zucchini, Bell Peppers, or even sweet treats like Kiwi. While pickles are likely not going to be your pup’s favorite treat, if you are limit your quantities, it should be no big deal.

Help! My Dog Just Ate Chocolate! What Should I Do Now?

Can Dogs Eat Prunes? Are Prunes Safe For Dogs to Eat?

My Dog Ate Grapes: What Should I Do Next?