Can Dogs Eat Jackfruit? Is Jackfruit Safe For Dogs?

Are you thinking of feeding your dog jackfruit, but aren't sure if it's safe? Veterinarian Joanna Woodnutt examines this exotic superfood, evaluating the possible risks and benefits to see if it's safe for your canine companion. 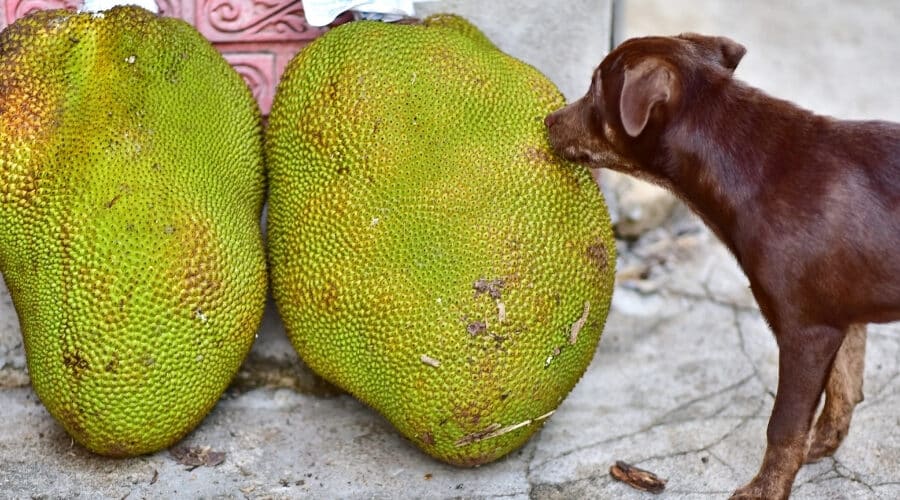 This article was written by a veterinarian, but it should not substitute as in-person evaluation of your dog. If your dog ate jackfruit and is acting adversely, contact your veterinarian immediately.

Jackfruit is a relatively new import here in the West, despite having been eaten in India and Sub-Saharan Africa for thousands of years. It’s getting a lot of interest in the USA as a meat-substitute, and it can now be found on restaurant menus in most cities. You might even spot it on market stalls and in supermarkets and be tempted to take it home and try it.

So, the next question on your mind is probably “can I share jackfruit with my dog?” This question is complicated due to the limited knowledge we have. It would be wise to check with your vet to see if there is any new research available on the topic before you feed it to your pooch.

There are also many different ways to feed your dog jackfruit, that you may be considering. So, is jackfruit safe for dogs? Is it something you can freely include in your dog’s diet on a regular basis, so they can enjoy the superfood nutrients and antioxidants, just like humans? Read on to find out more!

Is Jackfruit/Nangka Safe For Dogs?

The truth is that we don’t know enough about whether or not jackfruit is safe for dogs. In places where the tree is common, many mammals and insects appear to eat jackfruit that has fallen from the tree without issue. In addition, there are videos of dogs eating jackfruit on the internet. We can probably assume that any toxic after-effects would have resulted in the owner removing the videos.

Looking at fruit species related to jackfruit, including mulberries, most appear to be edible for dogs. But there just isn’t enough information out there to make a definitive decision that jackfruit is safe for all dogs. After all, it was only in the 1990s that grapes were found to be poisonous to dogs, and they’ve been around in this country for far longer!

We thought we’d look at the for-and-against for whether jackfruit is likely to be safe to feed your dog, so that you’ve got all the information you need to make your decision. Evidence that jackfruit is safe for dogs includes:

Evidence For Being Cautious in Feeding Your Dog Jackfruit:

Could Jackfruit Be Good For Dogs?

Jackfruit has a number of purported health benefits for humans- but there is little evidence for these, and no evidence at all in dogs. However, nutritional analysis has found it’s high in water and high in fiber, which is great for gut health. It’s also got high levels of sugar from carbohydrates, which can be a concern for weight-gain in dogs.

The levels of Vitamin B6 in jackfruit are thought to be very high, but dogs should be receiving enough B6 through their diets so this shouldn’t be a concern. On balance, jackfruit is likely to be a little better than sugar and water with some fiber thrown in, and a banana contains a similar nutrient profile, except with a little less sugar and a lot more fiber.

Jackfruit pulp or flesh is the part that most people are familiar with. It can be used as a meat substitute when underripe and has a texture a little like pulled pork. It can be eaten cooked or raw. There are no scientific toxicity studies to suggest whether jackfruit is safe for dogs. There are also no case reports of toxicity.

However, that doesn’t mean it’s definitely safe, as this fruit is only just making its way into our shops and homes, so reports are likely to be very rare, and vets may not yet have realized a pattern. There are videos online of dogs eating jackfruit pulp, so it appears to be safe, and we know dogs can eat some closely related fruits.

We also know that other mammals eat jackfruit without a problem. Jackfruit is probably fine to feed to dogs- but not definitely, and you have to ask yourself whether it’s really worth the risk.

Jackfruit seeds contain high levels of thiamine, magnesium and phosphorus- trace nutrients that your dog needs to be healthy. They’re known to be non-toxic in humans and have been eaten for centuries, particularly in Brazil, where they’re an important addition to the diet.

However, lots of things that are fine for humans are not fine for dogs, and seeds in general contain cyanide that can be a problem for dogs. We don’t know for sure whether jackfruit seeds are toxic to dogs, but we do know that they pose other dangers. Jackfruit seeds are very large- a similar size to a grape.

They can present a choking hazard, just like a grape does. In addition, they’re very, very hard, and hard to digest- especially for dogs. It’s likely that dogs eating jackfruit seeds will struggle to digest them and may end up with tummy upsets or even blockages. Despite the wonderful nutrients in jackfruit seeds, it’s probably best to avoid giving them to your dog.

Jackfruit can be extremely large (up to 100lb!), and it’s unlikely that your dog would be able to swallow one whole. But what if you came home to find your dog chewing a whole jackfruit- what then? Well, jackfruit skin is very tough and bumpy. It’s not impossible your dog would think this is a tasty new chew toy with gum-massaging bumps. The problem comes when your dog eventually tears off a bit and swallows it- jackfruit skin is considered to be indigestible and this could cause a problem for your dog.

If eaten, jackfruit skin is likely to irritate the mouth, gullet, stomach and guts due to its thick, fibrous and pitted surface. Whilst very small pieces of jackfruit might make it through the guts and pass, larger bits of skin may get stuck, forming a blockage.

This will quickly make your dog ill by preventing them from digesting food, giving them abdominal pain, and causing vomiting. The rough texture of the skin can even saw through your dog’s guts at the location of the blockage, releasing dangerous gut contents into the abdomen, which can quickly become fatal. If your dog has eaten jackfruit skin, you should call your veterinarian for advice.

Cooking jackfruit doesn’t make any difference to whether or not it is safe for dogs, so we still don’t know whether dogs can eat cooked jackfruit. If you do decide to give your dog a little cooked jackfruit, it’s important to check what the jackfruit has been cooked in or with to make sure there are no toxins. Garlic and onions are common ingredients in cooking that can be dangerous for dogs.

You may have some additional questions when it comes to jackfruit and your pup. We’ve compiled some of the most common questions that we field in the section below.

What should I be aware of when feeding my pup jackfruit?

As with any new food, it’s important to take care when introducing jackfruit to your dog for the first time. We really don’t know enough about whether dogs can eat jackfruit, so starting off with a very small amount (a teaspoon or less) and then monitoring closely is sensible. Look out for signs of allergy, such as abdominal pain and diarrhoea. If jackfruit irritates your dog’s stomach you may also see vomiting. If they show no signs after 48 hours, they should be safe to have a little more next time. Just remember that half a cup is a serving size for an adult human- so they don’t need much!

Although anaphylaxis appears to be very, very rare, it’s worth knowing the signs in dogs so that you can act if necessary. A fast heart rate, explosive vomiting, swollen face or muzzle and drooling are all signs that you should visit the nearest open vet immediately. Difficulty breathing, wheezing and pale gums are signs that the anaphylaxis is severe.

What about jackfruit chips?

Jackfruit chips should also be fine. They are made by using the flesh of a jackfruit, and usually do not include any harmful ingredients. It’s no different than apple chips, banana chips or chips of other exotic fruit, like Kiwi.

There’s no evidence that jackfruit is toxic to dogs, but this fruit is so new in the US it’s hard to be sure. Risk-averse people might want to try some other tasty fruits and vegetables that are known to be safe. There are plenty of other treats that your dog may enjoy, like Pineapple, or Papaya.

Stupid article! If you cannot say yes or no to the issue why bother write something that is totally a waste of time. Dr. Stupid.

Sorry you feel this way but the research is still limited at this time. Proceed with caution or check with your vet to see if there is any new research on the subject if you want to be certain and definitely avoid the pits and skin.

Pig Ears For Dogs: Are They Safe or Dangerous For Your Pup?

Can Dogs Eat Ginger? Is Ginger Safe or Harmful For Dogs?