Can Dogs Eat Goldfish Crackers? Are They Safe For Dogs?

Are you thinking of giving your pup a Goldfish cracker from your snack stash? Or perhaps your dog found one a kid dropped on the ground? Veterinarian Dr. Joanna Woodnutt evaluates whether Goldfish crackers are safe for dogs, reviewing the pros, the cons, and the risks. 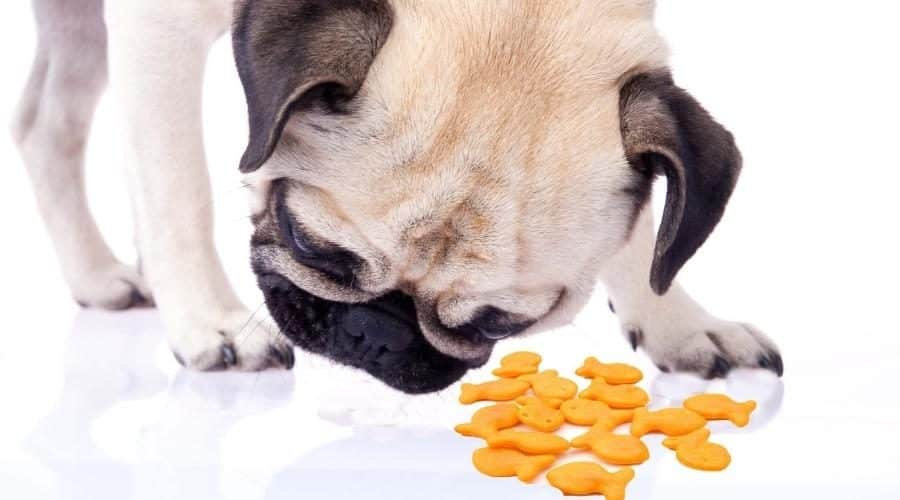 This article was written by a veterinarian, but it should not serve as a substitute for a discussion with a trained professional. If your dog ate this food item and is reacting adversely, contact your local veterinarian immediately. When you buy something through one of the links on our site, we may earn an affiliate commission.

Goldfish crackers are a popular savory snack enjoyed by many households for their salty and cheesy taste. Kids are especially fond of these little tasty, snack-sized morsels. But what if they end up on the floor?

Finding a treat on the floor is always an exciting moment for your canine friend, but should you share them with him? Are Goldfish safe for your dog to eat?

Let’s explore why it might not be a good idea and what to do if it happens. And, let’s be honest, it’s going to happen when little kids are eating snacks around your pup!

Is It Okay for Dogs to Eat Goldfish Crackers?

While the odd Goldfish cracker is unlikely to do any harm, it’s not a good idea to give them to your dog regularly. They contain little beneficial nutrition for pets, and you could argue this for humans too. Some of the ingredients in this snack, such as salt and onion powder, are not healthy for dogs and should be avoided.

Feeding your dog tidbits outside of his regular diet may lead to weight gain and could also discourage him from eating his normal dog food, leading to an unbalanced diet.

Are Goldfish Crackers Good for Dogs?

Not really. People should eat snacks like this in moderation, as an occasional treat, and dogs should have them even less frequently than this. They contain little in the way of fiber, protein, or vitamins and are carbohydrate-based, which means they can give your dog energy, but the extra calories on top of his normal rations could cause him to gain weight.

Are Goldfish Crackers Poisonous to Dogs?

Goldfish are not, strictly speaking, poisonous to dogs. However, they aren’t exactly healthy either. They contain the following ingredients that could have some adverse effects on your dog’s health.

Too much salt can be dangerous. This snack contains high levels of salt that dogs cannot tolerate as well as people. In mild cases, your dog can become excessively thirsty and dehydrated. If they overeat, they could develop hypernatremia, which has potentially fatal consequences. The high sodium levels can cause your dog to lose too much water from his body and lead to organ failure, resulting in seizures and death.

Both onion and garlic are members of the allium family. They can lead to issues with your dog’s red blood cells, creating oxidative damage that causes these cells to become fragile and break. This means there are fewer red blood cells in your dog’s circulation, leading to anemia. Your dog could take a few days to develop symptoms but may show signs of weakness, pale gums, and elevated heart rate.

A powdered version of these vegetables is perhaps even more potent than the vegetables themselves as it is a highly concentrated form. This means that even relatively small amounts could cause toxicity.

The main ingredient in Goldfish crackers is enriched wheat flour. This is not toxic to dogs, but equally, it doesn’t provide many health benefits either. It is flour that has been heavily refined and had most of its natural nutrients and fiber stripped away. Any vitamins it does contain have usually been artificially added to fortify the flour after treatment.

This form of carbohydrate adds calories to the diet with very little in the way of anything else. This can lead to spikes in blood sugar as well as weight gain.

Dyes are added to the crackers to give them a more intense color. These are usually plant-based dyes like annatto, but are thought to cause symptoms of ill health in some dogs.

Cheese is an ingredient found in Goldfish, which is not a problem for many dogs. However, some can struggle to digest lactose, a natural sugar found in cheese. This can lead to an upset gut with symptoms such as bloating, vomiting, and diarrhea.

What Should I Do if My Dog Has Eaten Lots of Goldfish Crackers?

If your dog has raided the cupboards and eaten a lot of Goldfish, then they could become sick. The following are some potential symptoms you could see if your dog eats lots of this processed, salty snack:

While the odd Goldfish cracker or two is unlikely to cause problems, you must call your veterinarian for advice if your dog has eaten a large quantity, especially if they show any signs of ill health.

Are There Other Potentially Harmful Snacks?

There are many other snacks that you shouldn’t share with your dog.

Dark chocolate and cocoa powder are more harmful to dogs than milk or white chocolate as they contain higher levels of theobromine. It is dose-dependent, so smaller dogs are more susceptible to its effects than larger dogs. You must get your dog seen by a veterinarian as soon as possible, even if they seem okay after eating the chocolate, as symptoms can take a few hours to develop.

Raisins (and grapes) can potentially be toxic to dogs, causing kidney failure and death. The exact mechanism of action is unknown, which means it can be challenging to know just how many make a dog sick. In some cases, one or two raisins can cause problems, but others could eat lots and be fine. As you can’t predict how your dog reacts, it’s best to play it safe and not give your dog any at all.

Macadamia nuts are particularly toxic to dogs and can cause issues with their nerve and muscle function. Some dogs seem more sensitive to the effects of macadamia nuts than others, but this can be hard to predict in advance. Other nuts you shouldn’t feed dogs include walnuts, pistachios, pecans, or any other heavily salted nut.

Processed potato snacks like chips and can contain high levels of salt as well as flavorings. While one or two won’t cause too many issues, giving them too many could lead to salt toxicity and weight gain.

You shouldn’t give your dog candy or sweets as they contain no valuable nutrients and very high amounts of sugar. Not only that, but some sugar-free candies could contain xylitol, which is highly toxic to dogs, causing dangerous side effects. Some hard candies could also be a choking hazard in dogs, especially round ones that could get stuck in your dog’s throat.

What Healthy Snacks Can I Safely Share With My Dog?

If you want to share some of your snacks with your dog, then it’s worth being aware of what is safe and healthy. While it is best to stick to your dog’s regular diet, here is a list of food you can give your dog as an occasional treat.

Avoid anything coated in sugar, salt, and toffee, as these are all unhealthy for our pets. Stick to plain popped kernels as a crunchy treat for your pet.

Cucumber, pepper, and carrot batons make excellent low-calorie treats for dogs. These vegetables are all safe and provide your dogs with additional vitamins and fiber.

Strips of lean meat like turkey or chicken make a tasty treat for your pet. Make sure the meat isn’t seasoned or cooked in sauce. It should be served to your dog plain.

Peanut butter is something many dogs enjoy – just make sure they don’t have it too often as the additional calories could lead to weight gain. It is best to smear it inside a toy or feeding mat so that it lasts longer and gives your dog some mental stimulation while he tackles it. Avoid reduced-sugar peanut butter, though, as it could contain xylitol, an artificial sweetener that is toxic to dogs.

There are lots of fruits that would make a good low-calorie and nutritious treat for your dog. Blueberries, strawberries, melon, apple slices, and pears are all safe for dogs. Make sure you avoid grapes (and raisins) as these can be toxic to dogs.

If your dog ate a considerable amount of Goldfish, they have the potential to cause side effects due to the ingredients they contain (salt and onion powder). Eating one or two crackers shouldn’t cause too much harm, though it is not recommended as a particularly healthy snack.

Are crackers poisonous to dogs?

Many different crackers are available on the market, many of which contain similar ingredients to Goldfish. If you have any doubts about the ingredients list, you should keep your crackers for yourself and feed your pet a dog-safe treat instead.

How many Goldfish crackers can my dog safely eat?

It’s best to make sure that your dog only ever has a couple of crackers on a very occasional basis. Any more could cause adverse side effects, so make sure you don’t leave any of these snacks lying around at home.

Goldfish crackers are not a very healthy snack for dogs, so you shouldn’t share them with your pet, no matter how much he begs. Some of the ingredients they contain could potentially be harmful in large amounts. The salt, onion powder, and garlic powder could all cause your dog to become unwell. It is usually best for your dog to stick to his regular diet, or you could try one of the safe and healthy snacks listed earlier. If your dog accidentally gets hold of a bag of these crackers, you should call your veterinarian for advice, particularly if they seem unwell.

Can Dogs Eat Turkey? Is It Bad For Dogs?

Health Disclaimer: The information provided through this website should not be used for diagnosing or treating a health problem or a disease. It is not a substitute for professional care. If you have or suspect you may have a health problem, you should consult your health care provider.

Food Safety Disclaimer: The information published on this website is for reference only. The only clear option for ensuring your pet’s health is to feed commercial-grade dog foods and treats only. Feeding human foods of any sort carries some degree of risk and is not under this website’s control.

My Dog Ate Coffee Grounds! What Should I Do Next?

My Dog Just Ate a Whole Banana Peel! What Should I Do?