Cinnamon is a widely used spice that can be found in almost everyone’s kitchen cupboard. It is warming and tasty, and a common ingredient used to add flavor to various dishes. But, do you know whether it is safe for canine consumption. Let's learn more. 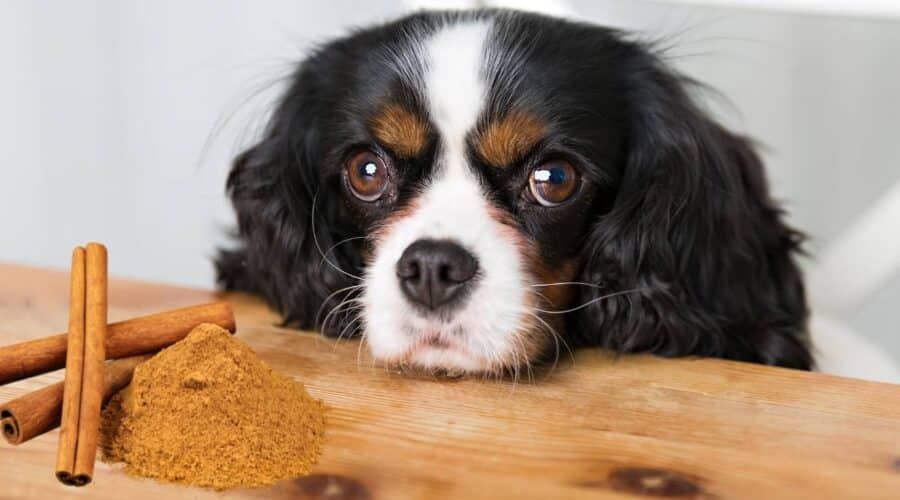 Cinnamon is native to Sri Lanka, India, Brazil, and Indonesia and it grows on Cinnamomum trees. The dried inner bark curls into cinnamon sticks after harvesting, before being ground into cinnamon powder.

There are two main types of cinnamon – Cassia cinnamon and Ceylon cinnamon. You might be wondering if it’s a safe spice for your dog to eat, and the good news is that cinnamon is not toxic to dogs, however, there are a few risks you should be aware of before feeding it to your pet.

So, keep reading to find out more about how to safely feed this spice to your dog, and how to avoid problems that can be triggered by cinnamon ingestion.

Is Cinnamon Safe For Dogs?

Cinnamon is one of the few spices that is non-toxic to dogs. So, the simple answer to the question “is cinnamon safe for dogs” is yes, but only in small amounts. Cinnamon is a great-tasting spice, and most dogs do love the taste of it!

How Much Cinnamon Can Dogs Eat?

Cinnamon should only be fed to dogs in very small amounts, so 1 teaspoon at the most, but ideally less such as just a sprinkle or pinch. Any more than this can be harmful and may cause some irritation to your dog’s digestive system leading to vomiting and diarrhea.  And just like many other human foods, cinnamon should not be a regular feature in your dog’s diet or sprinkled on their kibble. It should only be an occasional addition and is best fed as an ingredient in food rather than as a sprinkling or supplement.

Is It Safe To Give Cinnamon To Dogs?

The best and safest way for your dog to enjoy the taste of cinnamon is as an ingredient in other foods, usually treats. Homemade snacks and treats are not only healthy for your pet, and fun to make, but you can experiment with different ingredients and flavors to keep things varied and fun for your dog. Cinnamon adds a great flavor and complements most main ingredients such as oats, fruit, and veg.

Is Cinnamon Good For Dogs?

There are numerous claims that cinnamon has a wide range of health benefits in humans. Of the two types, Ceylon Cinnamon is considered the healthier of the two. It’s packed full of antioxidants that protect the body from oxidative damage caused by free radicals, and in some studies even comes out more powerful than other known ‘superfoods’. Cinnamon has anti-inflammatory properties and can help the body fight off infections. There is some evidence that it may be beneficial to sufferers of type 2 diabetes, where just half a teaspoon a day may reduce bad cholesterol. It’s also been demonstrated that cinnamon can improve insulin sensitivity.

These are all amazing benefits of this tasty and warming spice, but while cinnamon is not toxic to dogs, it’s still not something that should be a regular ingredient in their diet. We cannot always conclude that the same benefits will apply to our canine companions, and cinnamon would need to be consumed in high enough quantities to have these effects. A small amount of cinnamon as a flavoring in some homemade treats is okay, but the quantities needed to have health benefits may cause your dog to have an upset tummy so it’s best to stick to using it in small amounts.

Dangers Of Cinnamon For Dogs

While cinnamon is a non-toxic spice for dogs, there are a few risks and dangers that you need to be aware of, as there are various different forms of cinnamon that can be found in and around our home. It’s also important to remember that many of the baked goods or dishes that contain cinnamon might also contain other ingredients that are toxic to dogs, such as cinnamon and raisin buns, or dishes that contain onion.

Essential oils are an extremely concentrated form of certain herbs and spices, and therefore they present a bit more of a risk to our pets as even a very small amount could cause problems. Ingestion of cinnamon essential oil could cause a lot of irritation to the inside of your dog’s mouth as well as their stomachs. Your dog is likely to suffer from vomiting and diarrhea after eating cinnamon essential oil, and in very large quantities there is a risk of developing low blood sugar levels and liver disease.

What Happens If My Dog Eats Cinnamon?

If your dog gets their paws on a small amount of cinnamon or food containing cinnamon, it is very unlikely to harm them. A lot of recipes for homemade dog treats contain a small amount of cinnamon as flavoring, and dogs love it! However, if they eat more than a teaspoon, or eat it too often it might cause some mild tummy upsets. Symptoms of too much cinnamon might include vomiting, diarrhea, and a tummy ache. Larger overdoses of cinnamon might cause more severe vomiting/diarrhea and dehydration, a change in heart rate, a drop in blood sugar, and liver failure.

There’s also a small risk with cinnamon powder that it could be inhaled, and this can also be dangerous for your pet. Inhalation of cinnamon can lead to irritation of the airway including coughing, sneezing, choking, and in severe cases, breathing difficulties.

What Should I Do If My Dog Eats Cinnamon?

If your dog has eaten cinnamon in any form or is unwell after eating food containing cinnamon, you should contact your vet straight away for advice. Most mild cases won’t require any treatment, but your vet might suggest supportive treatment for a tummy upset such as bland food and anti-sickness medication or medicine to protect the lining of the stomach. More severe cases might require more investigation or supportive treatment in the hospital, but this is very rare.

Cinnamon and nutmeg are two spices that are commonly used together in cooking, and while cinnamon is relatively safe for dogs, nutmeg is toxic. It contains a toxin called myristicin and can cause an increased heart rate, drowsiness and disorientation, high blood pressure, and seizures. If you think your dog has eaten anything containing nutmeg, or any other toxin such as onion or raisins, you should get your dog seen by a vet straight away.

Which Spices Can Dogs Eat?

As a general rule, you should avoid feeding your dog too much seasoned/flavored food as it might give them an upset tummy. But there are several spices that are non-toxic to dogs and safe for them to eat in small amounts if they get their paws on it! Cinnamon, Anise seed, sweet basil, chamomile, coriander, dill, ginger, mint, and turmeric are all non-toxic to dogs.

If your dog has eaten the raw spice, or food containing a potentially toxic spice the safest thing to do is contact your usual vet straight away for advice and treatment.

How much cinnamon is toxic to dogs?

Cinnamon is not toxic to dogs. However, in large quantities or certain concentrated forms such as essential oils, it can be harmful and make your dog unwell. In humans, 1 tablespoon of cinnamon can be very dangerous.

Dogs do tend to like the flavor of cinnamon and many dogs enjoy it, especially as a little flavoring to some homemade dog treats!

What will happen if my dog ate cinnamon?

If your dog has eaten cinnamon the likelihood is they will be just fine! A small amount of cinnamon is safe to feed to dogs and is non-toxic. If your dog its too much cinnamon they might experience some irritation to their mouth, vomiting, diarrhea, or belly ache.

Which spices are harmful to dogs?

Cinnamon is tasty and warming spice that we love to use in our cooking, and it is indeed safe for dogs to eat in moderation as it’s non-toxic. It’s safe to feed in small infrequent amounts – up to 1 teaspoon as an occasional treat, but not every day.

Mixed or cooked into food is the safest way to feed cinnamon to your dog, but raw cinnamon powder, cinnamon sticks, and cinnamon essential oil are a little riskier to dogs and can cause irritation to the skin, airway, and gut and may lead to some vomiting and diarrhea or coughing and breathing problems.

If your dog has eaten cinnamon and you are worried you should always contact your vet straight away, but a small amount cooked into some tasty homemade dog treats will certainly go down well with your four-legged friend!

Best Pet Insurance 2022: Is It Worth Getting For Your Dog?

Pitbull Shedding: How Much Do Pitbulls Actually Shed?

Best Pet Insurance 2022: Is It Worth Getting For Your Dog?

Can Dogs Have Benadryl?