If your dog ate an apple core, you might be concerned. Apple cores contain apple seeds that have trace amounts of cyanide. So how much is too much? Veterinarian Joanna Woodnutt talks through what to expect, and your next steps. 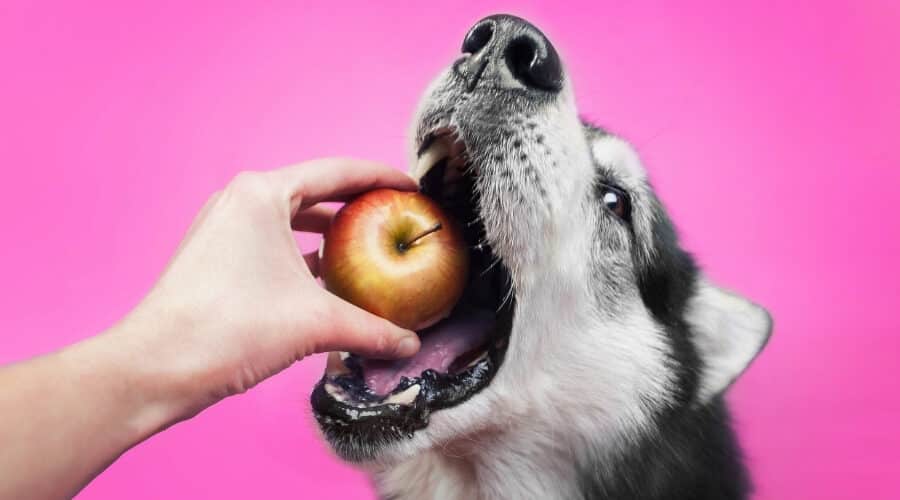 This article was written by a veterinarian, but it should not substitute as contact with a trained professional. If your dog ate an apple core and is reacting adversely, contact your local veterinarian immediately.

Apples are one of the many fruits that are safe for dogs to eat. Many dogs absolutely love apples, and just the sight of them can get a dog to drool in a few seconds. But what happens when your pup decides to grab an apple core when you aren’t looking?

It’s not uncommon to see your pup begging for another piece of your apple if they like them. But you’ll need to make sure you watch your pup because it’s not going to be long before they figure out you are leaving some behind. If your dog just ate an apple core off your counter, you are likely wondering if it’s safe, or if there are any toxic properties.

What Is An ‘Apple Core’?

The core of an apple refers to the central portion of the fruit which contains the seeds. It usually has the stalk at one end. The core is tougher than the rest of the fruit; therefore, it usually remains uneaten and is often discarded.

Some people would argue that this is a waste as the core doesn’t taste all that different from the rest of the apple. The core itself is generally not a problem for most dogs. But similar to pears and other fruit, the main issue lies within the seeds.

Should I Feed My Dog Apple Cores?

The short answer is no. We do not recommend feeding apple cores to your dog. Apples themselves are fine for most dogs, but the cores themselves are not. Just like banana peels, the biggest risk for a dog consuming apple cores is that it can present a choking hazard. It can also potentially cause a bowel obstruction, which is a life-threatening emergency.

If your canine companion ate an apple core while you weren’t looking, you “should” be fine. We still recommend calling your vet as seen in the steps below. But we do not recommend intentionally feeding your pup the core of an apple because of the potential risks.

Apple seeds contain amygdalin, and if the seeds are chewed, amygdalin degrades into cyanide. However, most dogs are very unlikely to chew the seeds thoroughly enough to release this toxin, and even if he did, there is such a tiny amount present that it will not cause any toxic effects in most dogs.

If your pup has liver disease, the seeds can cause a life-threatening emergency. You’ll need to contact your veterinarian immediately if this is the case for your pup. Even if your dog has a healthy liver, the most sensible thing to do is avoid them altogether with your canine companion.

Are Apple Cores Bad For Dogs?

Apple cores themselves are not harmful to dogs, although they could pose a choking hazard if swallowed whole. They can also carry the potential to cause a bowel obstruction if they are not thoroughly chewed.

The seeds within the core are what could cause the most concern. Apple seeds contain a compound called amygdalin. If a dog’s digestive enzymes come into contact with this compound, it gets broken down to form the toxic gas hydrogen cyanide. This chemical reaction can only occur if the seed shell breaks.

In other words, the apple pips would need to be thoroughly chewed up for cyanide to produce. Seeds that have not been chewed will pass through the digestive system undamaged.

Cyanide is toxic to all mammals, including dogs, and can even be fatal at high doses. It prevents oxygen from reaching the body’s tissues and organs. Symptoms of cyanide toxicity are significant and usually occur quickly within minutes. Signs include pacing, salivation, difficulty breathing, irregular heartbeat, and seizures, progressing to unconsciousness and death.

The good news is that there is nowhere near enough amygdalin in the seeds from one apple core to produce a toxic dose of cyanide. Almost all foods contain some degree of toxins.

If these are present in quantities below a threshold level, your dog’s liver will rid his body of these toxins with no harmful effects whatsoever. However, above this threshold level, the liver is overwhelmed, and toxins can have all sorts of serious side effects.

My Dog Ate Some Apple Core: What Now?

If your dog ate some apple core, including the seeds, then do not panic; he will most likely suffer no ill effects. But you’ll still want to follow the steps below to be safe. If liver disease is present, then the risk of toxicity from eating apple seeds is slightly higher, so it is best to contact your veterinarian straight away for advice.

The first thing you’ll want to do is evaluate your furry friend for any signs of distress. You want to make sure that there are no symptoms of a bowel obstruction. Watch for labored breathing or shallow breaths. Also, watch for vomiting.

Remove any remnants of the apple core or seeds that may still be laying around. Make sure your dog doesn’t have access to more of them that they can eat while you try to handle the situation. It may be worth putting your pup in their crate, or in a secured room while you do this.

Figure out how much was eaten. If it was just one apple core, your dog will likely pass it just fine as long as it was eaten, and not swallowed whole. You’ll want to know how much was consumed before you call your veterinarian.

Call your veterinarian. Be ready to explain to them what was eaten, and how much. You’ll want to be able to tell your vet about any symptoms of canine distress. Your vet may tell you to just wait and monitor your dog, if it was a small amount. You may also need to make an actual trip down to the vet’s office.

If your vet tells you to monitor your pup, you’ll want to keep an eye out for any signs of a bowel obstruction. Some parts of the apple core may also come out in your pup’s stool, so you may need to monitor that. If your pup shows no ill effects in the next 48-72 hours, then you will most likely be in the clear.

In a normal, healthy dog, cyanide is metabolized quickly, within about 10-30 minutes. It cannot accumulate and reach dangerous levels within the body.

If your dog has poor liver function, then it may be more susceptible to poisonous effects from any toxin, including cyanide. Signs of liver disease in dogs can vary but sometimes include vomiting, lethargy, weakness, diarrhea, yellowing of the whites of the eyes, and weight loss.

If your dog has any of these signs, you should visit your veterinarian to get him checked. If your dog has liver disease and his liver is not functioning as well as it should be, he may be unable to metabolize cyanide effectively. Any disease of the liver could mean cyanide will accumulate within their body, and it is more likely to reach a toxic level.

Dogs with liver disease can still be fed apple cores, but you should be extra careful to remove the seeds.

If your dog is prone to swallowing apple cores whole, they pose a choking hazard. If your pup has a particularly sensitive tummy, then eating an apple core may cause a digestive upset resulting in vomiting and diarrhea.

These symptoms could also occur if your dog eats a large number of apples, so never feed too many at once! As with any new food introduction, you should start by feeding a very small amount.

It is extremely rare, but there is a small risk of an allergic reaction to apples. If you see any sign of hives (small bumps that appear suddenly on the skin), swellings (especially of the head and face), coughing, or breathing difficulties, then contact your veterinarian straight away.

You might be worried that the sugars in an apple will cause your dog’s teeth to rot. Tooth rot is unlikely unless your pup is regularly eating a lot of apples, for example, grazing on windfall apples from the garden.

Can an apple core kill a dog?

It would be extremely unlikely for a single apple core to kill a dog. The biggest risk of death would come from your dog choking on an apple core. Even if your dog eats an apple core and thoroughly chews the seeds, the amount of cyanide released would still be a very low dose, well below the toxic threshold. If your dog has liver disease, he would be at greater risk of cyanide toxicity from apple seeds, so contact your veterinarian straight away for advice.

What is the toxic dose amount for apple seeds?

To put all of this into perspective, a 22lb (10kg) dog would need to eat approximately 1,000 apple seeds and completely chew them up to experience any toxic effects. A single apple usually contains around 8-10 seeds, so in reality, this 22lb dog would need to eat roughly 100 apple cores to be poisoned.

An even bigger dog would need to eat even more apple cores before feeling any toxic effects from the cyanide in apple seeds. So, although there is a theoretical risk of toxicity, the risk is tiny. Nevertheless, it would still be sensible to err on the side of caution and remove the seeds from an apple core before feeding it to your dog.

Can a dog eat an entire apple?

Dogs are carnivores, and their jaws and teeth are not designed for eating an apple whole, so they struggle to chew them up properly. They also pose a choking hazard if fed whole, so always cut an apple into bite-sized chunks if feeding it as a treat to your dog. If your dog does manage to eat a whole apple at once, do not worry. As long as he’s not showing signs of choking, it is unlikely to cause him any harm. He might have some digestive upset from the extra fiber intake.

What happens if my dog eats apple seeds?

In most circumstances, nothing. If your dog has liver disease, then it’s a cause for concern, as previously mentioned. But there isn’t enough cyanide in the seeds of a single apple to cause a small dog to be poisoned.

If your dog ate an apple core and you aren’t sure what to do, the safest thing to do is call your veterinarian. We recommend you always call your vet if you have questions or need some peace of mind. In most situations, it’s no big deal if your pup only ate a single core.

The primary things to watch out for are symptoms of bowel obstruction or choking. Your vet will likely recommend you monitor your dog for the next 48-72 hours, and you’ll likely be in the clear with a healthy pup after that time.

Can Dogs Eat Bananas? Are Bananas Safe For Dogs To Eat?

Can Dogs Eat Kiwi Safely? Is Kiwi Good Or Bad For Dogs?