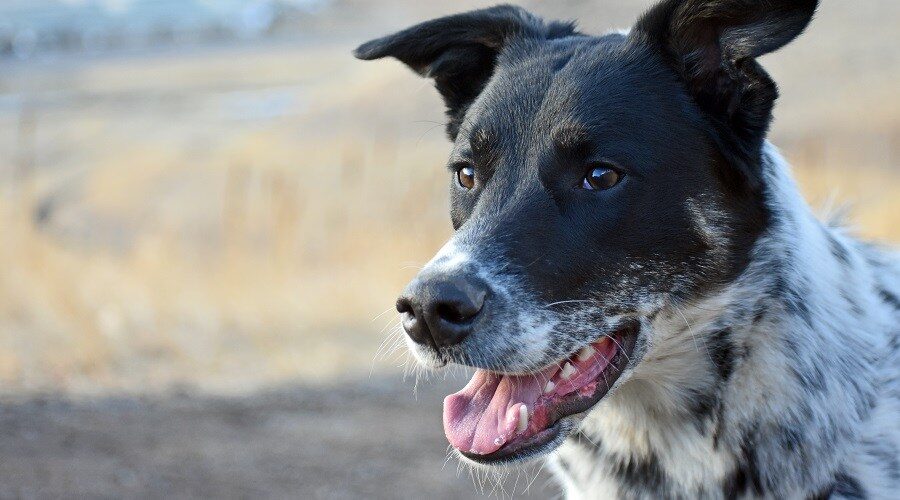 They say opposites attract and that couldn’t be truer than in the case of the Blue Heeler Lab Mix. The Labrador Retriever’s friendliness and trainability tempers a Blue Heeler’s fiery intelligence to create a dog that is bright enough to learn any task, and easy-going enough to want to learn it. This is certainly a case of two opposite breeds coming together to form one attractive mix.

To understand the success of the Blue Heeler Lab mix, one must understand the solid histories of its foundational breeds. Labrador Retrievers and Blue Heelers may have varied personalities, but they share a similar origin: they’ve loyally helping their owners through a rugged day of work for hundreds of years.

This means the Blue Heeler Lab mix is not only the ideal working dog, but also, unfalteringly Man’s Best Friend. Let’s look at each breed in more detail, and see what happens when you mix the two to get a Labraheeler.

Despite what the name suggests, Labrador Retrievers are not from Labrador at all. They were originally bred in Newfoundland in the 1500s. Originally known as St. Johns Water Dogs, they spent their days working on fishing boats. Their job was to retrieve the fish that came off the trawl and pull in filled fishing nets. Their thick, water-repellent coats were uniquely suited for spending their days swimming in the North Atlantic’s icy waters; and their otter-shaped tail and webbed feet helped propel them through the water.

English aristocrats began the breed’s ascent to popularity in the early 1800’s when they were discovered by British Earls and Dukes visiting Canada. They found the breed’s strong retrieving instinct and gentle manner to be ideal qualities for fowl hunting. It was the English that mistakenly associated the dog’s origin with Labrador.

They referred to the dogs as Labrador Retriever and the new name stuck to the Newfoundlander breed. By the end of the 19th century, the English had refined the breed so much that it was completely distinct from the St. Johns Water Dog and was considered an entirely separate breed.

In 1991, the Labrador Retriever was ranked the most popular breed in America by the American Kennel Club, and it has stayed at the top of that chart ever since—and for good reason too. Labs are renowned for their easy going and cheerful disposition. They are highly adaptable and easy to train. Labradors are also noted as being incredibly gentle—so gentle in fact that they can carry a raw egg in their mouth without breaking it.

Their trainability and gentle nature have made them an outstanding option for public service. They are frequently employed by the authorities for search and rescue, or detection work. They are also a popular choice for therapy and service dogs.  They are a very popular breed that gets mixed with other breeds fairly often.

Blue Heelers, also known as Queensland Heelers or Australian Cattle Dogs, were developed in the 1800’s– right as the English were discovering Labrador Retrievers. When Anglo-Australians migrated further inland from the coast of Australia, they found prime land for raising cattle.

However, Blue Heelers did not get their trade-mark appearance until later when brothers Harry and Jack Bagust introduced Dalmatians and Kelpies into the bloodline. Dalmatians gave Blue Heelers their trademark speckles and an affinity for working around horses, which was an important quality for ranchers. Kelpies introduced black and tan markings, extreme intelligence, and bravery around such large animals as cattle.

The result was a hardy, intelligent, herding dog adapted to long hours working in Australia’s challenging climate. Blue Heelers were pivotal to the development of Australia’s cattle industry which played an important part in the early growth of Australia’s economy.

The American Kennel Club’s Official Standard of the Australian Cattle Dog notes that Blue Heelers must always be alert and dedicated to their work. However, their high intelligence and courageous attitude can make them difficult to train.  Blue Heelers are known to be stubborn, and they get bored easily.

With such strong herding instincts, Blue Heeler puppies are prone to mouthy habits and their protective instincts makes them wary around strangers, so early socialization a must. Blue Heelers are happiest when they are at their human’s side, but they can struggle with separation anxiety. However, with proper training, you won’t find a more dedicated companion.

While crossbreeding can produce varied results in a dog’s temperament, a Blue Heeler Lab mix is sure to be fiercely loyal to their family and their work. The ideal Blue Heeler Lab mix will have the best of both breeds. They will be both intelligent and eager to please, which will allow them to be trained to do a multitude of complex tasks.

They will also be courageous and alert, keeping a close eye on their family while maintaining an easy-going nature around strangers. Since Blue Heeler Lab mixes are often brave and highly adaptable, they would make an excellent traveling companion, and should adapt easily to new environments and situations.

Since both Labrador Retrievers and Blue Heelers are high energy dogs, a Blue Heeler Lab mix will require a decent amount of exercise daily. Both breeds have been crafted for long days of hard work, and they are known to exhibit destructive behaviors when they have pent up energy. If you are looking for a dog that is happy to sleep all day, this breed probably isn’t for you. A Blue Heeler Lab mix will be happiest with a job.

Frequent, rigorous, exercise will be key to maintaining a peaceful household. During the prime of their life, a Blue Heeler Lab mix should be exercised for at least two hours each day. Fortunately, a Blue Heeler Lab mix could be interested in a wide variety of activities depending on the instincts they inherit from their parents.

Some Blue Heeler Lab mixes will enjoy endless games of fetch, or swimming, while some will exhibit stronger herding instincts. These mixes will be excellent farm dogs, or as a companion to hunters, or hiking enthusiasts.

The potential for a Blue Heeler Lab mix is truly limitless, they are intelligent enough to learn any task and active enough to keep up with the busiest of households. However, these strong, energetic dogs will benefit from early obedience training and socialization. Their high intelligence can cause Blue Heeler Lab mixes to become bored and destructive.

So, while physical exercise will tire out their body, training will be important to tire out their mind. These mixes could inherit some serious stubbornness from their Blue Heeler roots and might frequently test their boundaries. These dogs are sure to remember a time when they were allowed get away with something, so it is important that training is consistently reinforced.

Intelligent dogs will get bored completing the same task repeatedly, so training in short intervals, multiple times a day will keep a Blue Heeler Lab mix from losing focus on their task. Participating in a wide variety of activities will help keep Blue Heeler Lab mixes mentally stimulated and foster a strong connection with their owner.

Socialization will be particularly important to curb any protective instincts Blue Heeler Lab mixes might have inherited. The primary point of socialization for puppies is between 7 weeks and 4 months. During this time, the puppy should be introduced to a wide variety of people, places, and animals, so that the puppy feels comfortable adapting to any situation. However, these dogs can benefit from socialization at any age.

With patience, understanding, and help from an experienced dog trainer, older dogs who did not have the luxury of being properly socialized as a puppy can still become well-rounded members of any family.

If the breeding stock has been properly screened for predisposed genetic conditions, the Blue Heeler Lab mix should be an over-all healthy dog. The conditions that Labrador Retrievers are at risk for are typically negated when mixed with the much hardier blood of the Blue Heeler. They can also be less prone of obesity due to the Blue Heeler’s high metabolism.

There are two conditions that Blue Heeler Lab mixes particularly are predisposed to:

The Blue Heeler Lab mix is a breeze to groom. They have a double layered coat that only requires brushing twice a year during shedding seasons; and an occasional bath will help reduce any smell they pick up from romping around outside. If their ears are pointed, they will require an occasional ear cleaning because their ear canal is not protected from debris.  Like all dogs, their nails should be regularly trimmed; and their teeth should be brushed to avoid tooth decay later in life.

Blue Heeler Lab mixes are hardy, energetic dogs who would thrive in a working environment. They are highly intelligent and suited to a wide variety of tasks, but they require plenty of exercise and mental stimulation to keep them happy.

Blue Heeler Lab mixes would be a great companion to anyone who enjoys the outdoors; and with proper training, they will be a dedicated and loyal family dog.