Both the Aussiedoodle and the Bernedoodle are family-friendly poodle mixes. But outside of their looks, they are actually quite different dogs when it comes to other traits. In this breed comparison, we take a look at these two family-friendly doodle dogs to help you figure out which designer dog is a better fit for your lifestyle. 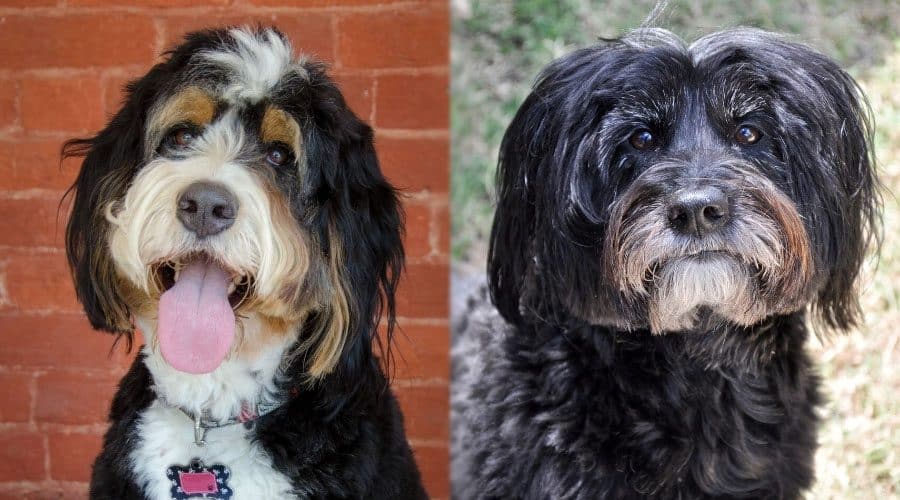 Bernedoodles and Aussiedoodles are great for first-time dog owners or those who are ready to take the plunge into dog ownership. These popular crossbreeds are family-friendly and entertaining. Not to mention, very cute!

These dogs may share some genetic traits due to their parents, but they have many differences. Just because they both share a Poodle parent doesn’t mean they are going to be all that similar when it comes to their personalities. They may look a little similar, but that’s about where the similarities stop!

Potential owners need to study each breed so they can select the perfect pup for their particular lifestyle. Below is a thorough comparison of the Bernedoodle and the Aussiedoodle, from appearance and temperament to grooming and pricing information. Let’s jump in!

Learning about each dog’s ancestry can explain a lot about them and how they would act as pets. These popular hybrid dogs are both doodle-dog crossbreeds. Both dogs are becoming more and more popular each day, but where did these hybrids come from, and when did people start falling in love with them? Read on to discover how these two beautiful dog breeds came to be.

Combine a Poodle and a Bernese Mountain Dog, and you’ve got a fluffy and oh-so-adorable Bernedoodle! Sherry Rupke of Swissridge Kennels created this relatively new breed in 2003 to combine the gentle and fun-loving personality of the Berner and the smart and low-shedding Poodle.

Bernese Mountain Dogs originated in Switzerland and were often used on farms to pull heavy loads on carts and perform other jobs requiring a lot of strength. The Poodle hailed from Germany and France, where breeders originally bred them as hunting dogs and water retrievers. Poodles also come in three different sizes, including standard, miniature, and toy, which explains the various sizes of this mix (standard, mini, and micro).

The Aussiedoodle, formerly known as Australian Poodles, is a cross between the loyal and hard-working Australian Shepherd and the energetic Poodle mentioned above. These loyal pups also come in various sizes (standard, mini, and toy), depending on the type of Poodle bred, but are usually bred with a standard-sized poodle parent.

Not much is known about the hybrid Aussiedoodle’s origin, as they are also a fairly new designer dog. However, the parent breeds both have extensive histories. Australian Shepherds were brought to the U.S. from Australia during the 19th century, where people mainly used them as herding or guide dogs because of their hard-working and intelligent nature.

Aussiedoodles started gaining popularity in America during the 1950s, after appearing in multiple southwestern movies. Fast forward to now, and they have become a family favorite!

Both dogs are very similar in appearance, as they share a Poodle parent. What differs the most is their distinct personalities, which we will discuss later.

The Bernadoodle is slightly taller and heavier, standing between 10 to 29 inches tall and weighing between 15 to 90 pounds (depending on how much they eat and their size). There are three sizes of Bernedoodle pups, including standard, mini, and micro. They can have straight, wavy, or curly, tri-color coats (usually white, black, and brown). The most common Bernedoodles are crossbred from standard-sized dogs, which are 60-90 pounds.

Aussiedoodles also can be in three sizes, including standard, mini, and toy. They tend to be the smaller of the two dogs, weighing from 10 to 70 pounds and standing between 10 to 24 inches tall (depending upon their size). They can have curled, straight, or wavy fur that can be a mixture of blue or red merle, chocolate, black, and white. And, of course, they also share the Aussie’s adorable floppy ears.

Both dogs are playful and fun to be around, but there are a few distinctions in their energy levels and personalities. Each pup’s characteristics can vary, depending on the combination of traits they receive from their parents.

Aussiedoodles are extremely intelligent and loyal with higher energy. They require a lot of attention and are a perfect puppy for more active lifestyles and older children who can handle more aggressive play.

Many Aussiedoodles tend to nip at children while trying to herd them, which can be concerning if babies and toddlers are crawling around the house. These pups are laser-focused and love to perform tasks for their owners, which most likely stems from their herding background and industrious roots.

Bernedoodles are incredibly loving and gentle while still maintaining a moderate energy level for playtime. Their mellow and laid-back temperament makes them great for cuddling on the couch too. However, owners must give them regular physical activity, as they can quickly become lazy.

These goofy dogs are better suited for younger children, as they are calmer and softer during play. Owners should be aware that these charming pups tend to be skittish and overly sensitive and also need early socialization as a puppy to prevent separation anxiety.

Keep in mind that the amount of exercise both dogs need depends on their specific size and age. Experts recommend starting your puppy off with small amounts of exercise and increase around five minutes each month.

Bernedoodles can gain weight quickly, so they need a consistently healthy diet and daily exercise. They are moderately active and do not need vigorous activity to stay fit. Because they are bigger than Aussiedoodles, they may also require a larger, fenced-in yard or play area.

Pet-shoppers should note that the smaller-sized Bernedoodles usually have more energy than those that are standard-sized. Regardless, they are a highly adaptable breed that can live comfortably in an apartment or house, as long as they get at least one walk per day and adequate attention and affection.

Aussiedoodles, on the other hand, are always racing around, eager to play a new game or do something for their owner. These task-oriented pooches need both mentally and physically stimulating activities to keep them occupied. These dogs need around at least an hour or two of people-accompanied exercise each day to satisfy their need to move.

Aussiedoodles use to work on ranches and farms continually; it’s in their genes! So don’t be surprised when they get bored after only a few minutes with a new toy. They are always craving new challenges.

Giving them various toys to play with each day can help them burn off all that excess energy. Leave them alone for too long, and they’ll become frustrated and destructive.

Dog owners can teach either dog plenty of tricks with a little patience and consistent practice. Although they can both be stubborn at times (Bernedoodles during their teenage years and Aussiedoodles when they get bored with a task), they thrive when presented with a new challenge.

Both breeds have a deep desire to please their owners and quickly catch onto even the most challenging jobs or tricks. Each of them responds well to reward-based training techniques, especially when their favorite treats are involved.

Owners should note that Bernedoodles can be more headstrong, especially during the puppy stage. Thus, they may require more effort during training and need to start training and socializing much earlier. Overall, both pups are willing and ready to learn something brand new each day (maybe even each hour).

Since both breeds are crossbred, they inherit a characteristic known as Hybrid Vigor (also known as heterosis). In simpler terms, this refers to the improved attributes of the offspring compared to its parents. Pups with this trait have lower risks for genetic diseases passed through purebred bloodlines, allowing them to enjoy enhanced health.

Each dog is susceptible to various diseases and genetic conditions based on the traits each parent passes on. For example, if the puppy has a higher percentage of Poodle genes, it will have a higher risk of developing diseases that Poodles commonly experience.

Both dogs can develop the following conditions since they share Poodle genes:

Bernedoodles tend to have longer than average lifespans, often living up to 18 years. However, because of their Berner parent, they are at an increased risk for hip and elbow dysplasia, heart disease, cancer, Von Willebrand’s disease, epilepsy, allergies, and skin and bone issues.

Before purchasing a puppy, make sure the breeder can give written health documentation about its parents. Reputable breeders will provide all honest and necessary information to dog owners.

Both dogs can both benefit from high-quality, dry kibble that consists of healthy ingredients. In most cases, it’s wise for owners to abide by the food manufacturers’ serving sizes. Talking with a licensed veterinarian can also help determine the correct type and amount of food to fulfill the dog’s nutritional needs.

Aussiedoodles are much more athletic and active, so they often require more food. Bernedoodles also tend to gain weight easily, so it’s important to watch their diet and ensure they receive the proper amount of physical activity.

As with any canine companion, it’s essential to monitor their food portions to prevent overeating and unnecessary weight gain. In addition, it’s always good to have a large bowl of water readily available to keep them hydrated.

Both breeds fall into the high maintenance dog category when it comes to grooming, as they share the Poodle’s curly, scruffy, or frizzy coat. They each require frequent cuts, brushing, and washing to prevent matting and tangles.

The Bernedoodle usually needs more brushing and grooming because its hair tends to grow faster. Overall, the longer and curlier the pup’s hair, the more difficult grooming may be. It’s always a good idea to check for knots and debris in a dog’s fur and brush it out as soon as possible to keep them comfortable and their coat beautiful.

Both dogs are minimal shedders, which is part of why they are so popular. Each should be brushed approximately two to four times per week, along with proper nail cutting, dental care, and ear cleaning.

One of these puppies’ costs depends on a variety of factors, such as if it is adopted, purchased from a reputable breeder, or rescued from a local animal shelter. The size, age, color, and location also play a role in the total price, as with all other puppies.

Buying directly from a reputable breeder is the most expensive option and can range from $1,500 and up for Aussiedoodles and $2,000 and up for Bernedoodles. Adoption or rescue can be a better option for those with tighter budgets, ranging from $100 to $500 in fees for both breeds.

Often the smaller dogs cost the most, as these are rarer and generally more difficult to breed. Bernedoodles are usually more expensive because of their genetic relation to the Bernese Mountain Dog, which is among the healthiest existing dog breeds.

Dog owners really can’t go wrong when choosing to adopt either mix. Although it can be challenging to choose between the giant, cuddly Bernedoodle and the cute, clever Aussiedoodle, both make lovely pets. Each dog can undoubtedly be a lovable addition to any family.

However, it’s important to remember the differences between each breed to ensure the best possible fit. Those looking for a nightly snuggle buddy with a heart of gold may want to opt for a Bernedoodle. In contrast, others who are searching for a smaller-sized, high-energy play pal may enjoy an Aussiedoodle. Either way, dog owners will automatically have a best friend for life!

Bernedoodle vs. Sheepadoodle: What’s the Difference?