Thinking the Beagle or the Basset Hound could be your next canine companion? These two dogs fit in well with many families, but they aren't the breed for everyone. Find out what you can expect from both breeds. 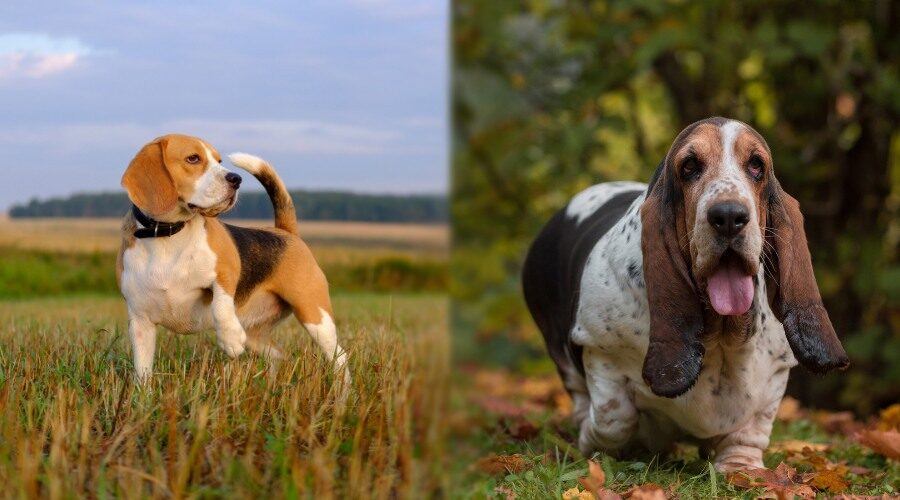 The Beagle and the Basset Hound might look different, but they are both easily identifiable as hunting hounds. They are both the best at their hunting game, and they both have impressive noses that they often listen to more than their owner.

They are similar in their temperament in that they are sociable and lots of fun. They make great family pets, but they can also both make a lot of noise. The Beagle lives slightly longer and he costs a bit less to buy, but he needs a lot more exercise compared to the Basset Hound.

There are pros and cons to each breed, so let’s take a closer look at what these are, and hopefully, it may help you to decide which pup is best for you.

It is important to note that the American Kennel Club (AKC) recognizes two varieties of the Beagle, the standard version and the smaller version, with many people referring to them as the ‘pocket beagle,’ but other than their size they are exactly the same.

The Beagle’s history is somewhat of a mystery. The word ‘Beagle’ either comes from the Gaelic word, ‘beag’ which means little, or it derives from the French word ‘be’geule’ which describes the sound that hunting dogs make during their hunts.

It is believed by the majority of fanciers that the Beagle, as we know him today, originated from England in the 18th Century; however, his ancestors date as far back as 55 B.C. He is believed to be related to the St. Hubert Hound like most hunting dogs. The Beagle was popular amongst English Gentlemen, who used packs of them to hunt hare.

Beagles began to arrive in America during the middle to late 19th Century. They were an instant hit with hunters who still to this day believe that their gifted nose, remarkable tracking abilities, and their love for hunting make for the best hunting dog. The American Kennel Club (AKC) has currently ranked them as the 6th most popular dog breed in America. The Beagle is most famously known for being the cartoon dog, Snoopy.

Beagles have been a popular breed to crossbreed with other dogs as “designer dogs.”  Some popular mixes are the Aussie-Beagle mix and mixing a Beagle with a Corgi.

The Basset Hound’s origins lie in France, with the word ‘Bassett’ meaning low in French. It is believed that his ancestors were St. Hubert Hounds, but he is a result of breeding those hounds that suffered from dwarfism.

Despite suffering from the genetic mutation, the shorter hound’s ability to track underbrush was observed to be advantageous to hunters, and as such, they were selected with purpose. Basset Hounds have always been popular amongst French Aristocracy, but after the French Revolution, they became popular with hunters who could not afford to keep horses, as the Basset was easy to keep up with on foot.

The Basset Hound became popular in America during the 20th Century when the magazine, Time, featured him on the front page with an accompanying story, and furthermore when he famously became the icon of the footwear brand ‘Hush Puppies.’ He has been ranked by the AKC as the 39th most popular dog in America.

The Beagle and the Basset Hound differ in their structure and measurements, but yet they are quite similar in their general appearance as they both descend from the same dog, the St. Hubert Hound.

The Beagle is the smaller pup of the two, with the standard variety of the Beagle weighing 20 to 30 pounds and the Basset Hound weighing 40 to 65 pounds. Yet, they are similar in their height, with the standard Beagle measuring between 13 to 15 inches tall, from paw to shoulder, and the Basset Hound measuring up to 15 inches tall.

Despite the similar height, the Beagle has longer legs and a shorter body, whereas the Basset has shorter legs with a deeper chest and longer body. The shortness of his legs is a result of breeding specimens with dwarfism, and their legs are very similar to that of the Dachshund. They are often compared to foxhounds as well.

The most distinguishable feature of the Basset Hound is his ears. They are extremely long, the longest of any dog breed, and when pulled forward they easily cover his nose. They are velvety in texture and are set far back on his head.

The Beagle also has long ears compared to the size of his head, but they are nowhere near as long as the Basset’s. The Basset also has another distinguishable feature, and that is his extremely large paws compared to his short legs. Generally, the Beagle is a well-proportioned dog, whereas the Basset is not with his droopy (but adorable) features.

Their coat colors are similar, in that they both have the traditional hunting colors; a mix of different shades of black, brown, and white colors, and the distribution of color and markings are sporadic. The Beagle typically has a brown and white face with brown ears, whereas the Basset Hound has darker facial features.

The Beagle and the Basset Hound, both being hunting canines that descend from the same breed of dog, means that they are quite similar in their temperament. They are both friendly and sociable pups and being a traditional pack dog, they love (and need!) to be part of the human pack.

Neither of these guys does very well on their own and they are known to suffer from separation anxiety. However, if you can give them the attention that they need then they make great family companions.

They also both love to be around children, however, their hunting streak means that they are known not to appreciate small furry animals in the house.

Both the Beagle and the Basset Hound love to howl, particularly when they hear something tuneful like a siren or a piano. It can also be a sign of boredom.

The Beagle is also known to bark more than the Basset. For this reason, if you live in an apartment or accommodation with noise restrictions, neither of these breeds would be a sensible choice of pup. Additionally, they are both equally clumsy and are both known to be the class clown, who will both provide you and your family with a lot of laughter.

However, with their great sociability and fun-loving nature comes a shortcoming, they are both very stubborn and very independent canines who have the ability to become deaf as and when they want. This can be very frustrating, particularly for the novice dog owner.

As history would suggest they both make great hunting dogs. But which makes the better hunter? Well, the Basset Hound has the second-best nose in the canine kingdom after the Bloodhound, so he will latch onto scents quicker. However, the Beagle is much quicker in pace and has better stamina. However, there is yet to be a definitive answer to this question, as they both make tremendous hunting dogs.

The Beagle is a high-energy dog and the Basset Hound is a medium-energy dog, so this is an important factor if you are trying to decide between the two. The Beagle will need at least 60 minutes of intense exercise a day, whereas the Basset will be happy with 30 minutes a day.

It is suggested that neither of these guys should be let off-leash in public, for if they catch a scent, they will be off quicker than a toupee on a windy day! Many owners of both breeds suggest that no matter how well trained and obedient they are, their instinct will take over if they smell something interesting.

With that in mind, particularly regarding the more energetic Beagle, if you don’t have a large secure yard then you can hire a dog training yard, or field, solely for this purpose; to let high-energy dogs off leash without the risk of losing them.

As both the Beagle and Basset Hound are stubborn and independent, their training can be equally difficult, and it is certainly not for the novice owner. Early training is important to increase your chances of having an obedient pup in later life. They both respond well to positive reinforcement training, and training sessions should be kept short and interesting.

Early socialization is important, particularly for these guys, so that they are comfortable in all situations, and to teach them that dogs, and hopefully other animals, are not to be chased and hunted!

The Beagle and the Basset Hound are both generally healthy dogs, who enjoy a long lifespan, with the Beagle living slightly longer than the Basset. Their main health concerns are entirely different.

The Beagle National Breed Club suggest that his parents should be tested for the following issues:

The Basset Hound National Breed Club suggest that his parents should be tested for the following issues:

The Beagle will eat half the amount than the Basset, with the Beagle eating 1.5 cups of food a day, and the Basset Hound eating three cups a day. They both love treats and snacks, this is great for training aids, however, be sure to monitor their intake to avoid them becoming obese as they can easily pile on the pounds.

The Beagle and the Basset Hound differ in their grooming needs, with the Beagle being easier to care for. They both have a short coat; however, the Basset Hound requires more brushing as they shed more heavily when compared to the Beagle. The Beagle should be brushed once a week, whereas the Basset requires a brush two or three times a week.

They should both be washed every 4 to 6 weeks; however, the Basset tends to have a stronger doggy odor so once every four weeks is probably more appropriate for him.

They both have long ears and so extra attention should be paid to them, and regular cleaning is a habit that should be kept to. This is particularly important with the Basset! In addition, the Basset has wrinkles and skin folds unlike the Beagle, and as such extra care to clean in between these is important, and it is also equally as important to dry them to avoid dampness and sores from developing.

Unlike the Beagle, the Basset Hound is a bit of a slobberer, so be prepared for a bit of drool around the house. He is also known for his flatulence, more so than the average pup. You should be tolerant of both of these extra gifts if you are considering welcoming a Basset into your home.

The Beagle will start out around $1,000 for a purebred puppy. The Basset Hound costs about $1,000 and up. As always, the breeder’s reputation and the puppy’s lineage will factor into the cost of the dog. A Beagle with a more superior lineage can cost $1,500 or more. A Basset Hound with exceptional pedigree can go up to $2,000.

It is also very common to find either the Beagle or Basset Hound in a shelter or rescue. Here, there are many dogs that need a new home. Plus, the process is simpler and is much less expensive to adopt compared to puppy stores. Begin by researching local shelters or adoption centers.

The Beagle and the Basset Hound are different in their appearance, but at the same time, they are quite similar as they descend from the same hunting dog. Their temperaments are also very similar. The common deciding factor between the two breeds is their appearance.

The Beagle and Basset Hound are fantastic hunting dogs, but they also make great family pets. Despite their very few shortcomings, such as being stubborn and really barky, they make up for it with their boundless energy, hours of entertainment, and unconditional love.

So, you hopefully have all the information you need to decide whether it’s Snoopy or droopy that you prefer!