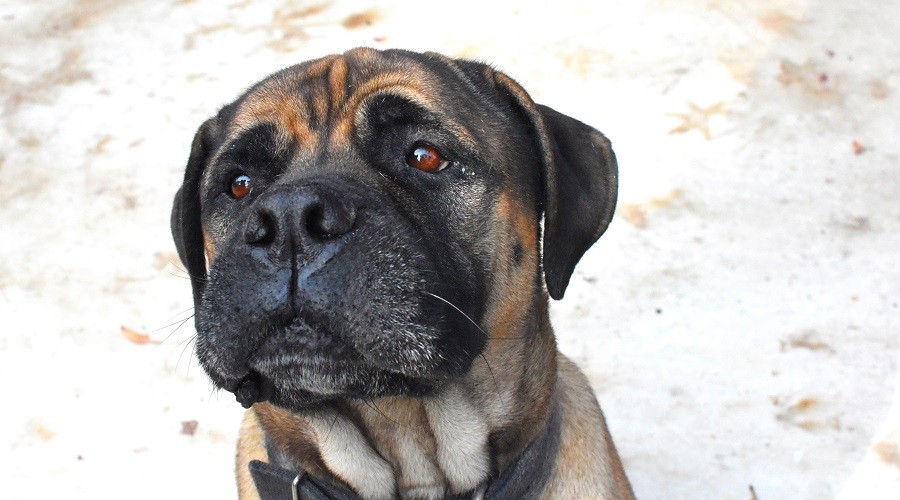 American Mastiffs are a different type of dog breed, and not one that just “any person” can or should own.  They are different than English Mastiffs, and we know this because we actually have one of each at the Wilson household.

American Mastiffs are large and powerful dogs, and their temperaments can vary by breeder.  From conversations I’ve had about the breed, the originator of the breed has pups that can be slightly more active, and some on the leaner side.  Our girl Freyja was the runt of the litter, and she’s filled out at 2 years old at around 130 pounds.  Still pretty big for a runt!

We will dive into more detail below, but the American Mastiff is basically 15/16th’s English Mastiff and 1/16th Anatolian Shepherd.  The percentage varies depending on who we’ve talked to, but the ratio is small.  We plan on using an Embark Test soon to see exactly how it comes back because that test was very telling for our Rescue Mastiff Uhtred, who happens to be a fluffy mastiff.

Let’s look a little more into the history of the breed, as well as temperament & more.

The American Masitff was developed over 20 years ago by Fredericka Wagner of Flying W Farms.  In the year 2,000, the Canadian Kennel Club recognized the breed as a “purebred breed.  The American Mastiff was actually up for AKC certification at one point, but the American Mastiff Breeders council decided against it, due to regulation (at least that’s what I was able to find when doing some forum digging).

The American Mastiff was all English Mastiff until several generations ago, an Anatolian Shepherd was brought into the line.  Anatolians share genetic traits with other molosser dogs, just like pitbull and the mastiff.  Those pups were then bred from that point forward in order to create a dog that was similar to the English Mastiff without the drool.  The crossing of the Anatolian Shepherd dog into the Mastiff line helped tighten the lip line and give them a slightly leaner physique and look.

Just because they were originally leaner though, does not mean that they are much smaller than English Mastiffs.  In fact our American is actually the same height as our English male, he’s just more filled out than her and he’s around 155 pounds which is also on the smaller side for a true purebred English Mastiff.

The American Mastiff has a pretty dry mouth as mentioned.  Our Freyja actually has a tighter lip line as advertised, and she drools less than our EM.

American Mastiffs can be just as big as their English Mastiff relatives.  In fact, I’ve met some other AM owners locally in Arizona, and their AMs are well over 200 pounds.  The males will typically be anywhere from 32 to 26 inches in height when fully grown, whereas the females will be about 30 to 34 inches.  Our Freyja is about 31 inches tall, which matches our EM. You can see that they look very similar in the video below.

The average male weighs in at about 180 pounds, but they can exceed 200.  The girls usually end up between 140 and 180 pounds. As mentioned, our girl was the runt of the litter, so she’s about 10 pounds on the lighter end.  Every dog is different and the American Mastiff can vary in size as a result. Generally speaking, they aren’t too far off in size of an actual EM.

American Mastiffs have a short and dense coat, and look pretty similar to English Mastiffs.  They come in similar colors, which are Apricot, Fawn, Brindle and Reverse Brindle.  They do not shed a ton, and usually this can be managed by just keeping up with regular brushing of their coat.

Some of them have white markings on their chest, which is also common with EMs.  This isn’t considered a fault, but since AMs typically don’t show, there’s really no worry even if it was considered a breeding fault.  Our Freyja’s coat is soft and cuddly, and still even at two years old feels almost like puppy fur.  She was a fawnish colored apricot when she was born, and darkened up as she got older into a more true golden apricot color.

The muzzle on all American Mastiffs is black, which extends to the top of the head in some dogs.  Freyja’s face was completely black when we brought her home, and as she aged some of that black faded from her forehead as she grew into her body.  Some American Mastiffs will have more black in their muzzle, and have it cover more of their face.  Some take more after the small percentage of Anatolian Shepherd and actually have less black in the muzzle.

The American Mastiff is very similar to the English Mastiff.  In fact many of their traits carry over.  Some of the breeder websites list them as neither shy nor vicious, controlled and confident yet patient with their families.  They are not aggressive in nature unless their family who they are bonded with is somehow threatened.

From our experience, all of this is very true.  While I can’t say if it’s the individual dog or a true American Mastiff trait, our Freyja is more playful than any dog we’ve ever owned and that includes our Chocolate Lab we owned for over 13 years.

Our Freyja has sass and attitude for days, and she’s always on what we call “mastiff time.”  This basically means she will listen to you, but in her own time.  Some people might think this is a major problem, but she’s only obstinate at times, and she eventually does what you want, she just does it in her own time.  She is far more independent than our EM who is like a slab of velcro, but she does sill love to be in the same room with you most of the time.

She’s absolutely wonderful with our kids.  She’s patient and sweet, and she’s always quick to give out what we call “head hugs” which is something we’ve seen that’s absolutely unique to the mastiff.  She likes to lean into you with her head after you pet her, and stays there until you pet her again.

While there are some English Mastiff purists out there that do not think that an American Mastiff is anything more than a mutt, we’d say the temperament closely matches our EM.  She may bark a little more, but we think that’s dog specific and not breed specific since our old Lab used to bark when she was a pup.  We think it’s a learned behavior because most American Mastiffs we’ve met do not overtly bark.  Overall, we think our AMs temperament is one of the best we’ve had in any dog.

Like the EMs, American Mastiffs are STUBBORN when they are young from our experience.  An experienced trainer can definitely make a difference and help you introduce your pup to basic obedience principles, which we highly recommend because these dogs do get bigger as they age. This is a stubborn breed, as evidenced by our barker below.

Don’t be surprised if it takes more time for your American Mastiff to pick up on the tricks and basic obedience training lessons than it does a Labrador or Golden Retriever.  Mastiffs are labeled less smart than other breeds, but that’s also because they were largely bred for different skills.

We actually feel that our Mastiffs are pretty smart, and may be smarter than other dogs.  We feel that ours understand our commands – but they are so hard headed that they just do what they want anyways.  That gets them the “dumb” label but it’s really kind of out of place.  If you are a strong leader and keep up with training, your AM can be very well behaved.  Our Freyja walks on leash very well and has become a very good listener through positive reinforcement and repetition.

Crate training is also a must for any dog, and just expect that you need a HUGE crate for an AM.  We have two extremely large crates, and our pups love their crates and crash in there routinely even when the doors are wide open.

American Mastiffs do require slightly more exercise than an English Mastiff, but not by much.  A walk around the block is pretty sufficient, and exercise needs do seem to vary by dog.  Our EM keeps up with our AM pretty well and it only takes about 10 minutes a day to be tuckered out for several hours.

American Mastiffs are Giant Breed dogs, and this means that they spend a whole lot of time eating and sleeping!  You actually need to be careful that in the first 6 months you aren’t exercising your puppy too much or you may damage their joints and ligaments.

They grow so fast that only a short walk is needed on a daily basis and going much harder than that can cause longer term damage.  No running and no jumping to be on the safe side.  We kept our walks to a brisk daily routine, and even that wasn’t enough to prevent Frejya from tearing her ACL by hopping out of our family minivan.

American Mastiffs are big dogs and they eat a LOT.  I would expect anywhere from 6 – 12 cups per day of high quality large breed dog food, and preferably grain free because their stomachs can be sensitive at times.  When  you do the math on that, the costs of owning a Mastiff start to really add up!

We also mix wet food, or chicken/pork/beef to their regular hard kibble in order to give them a little flavor of something different.  We’ve noticed no ill effects in doing so, but anytime we introduce some type of grain we get the opposite reaction so we try to keep that to a limited minimum.

Higher quality dog food costs more, and your pup will be eating alot of it as he/she grows.  Budget accordingly as we spend about $150.00 per month just on dry dog food kibble.  That’s a lot of coin over the years, and could have been a nice family vacation.  Never underestimate the true cost of owning a dog!

Finding a breeder is pretty easy.  There are only 11 AM approved breeders in the country.  We got our American Mastiff from Flying W Farms, and I flew across country to get our pup.  They have breeders in locations all over the country.

Because the breed’s integrity has been kept intact for so long, it requires approval and permission from the other American Mastiff breeders to start breeding more of the same breed.  In fact, we couldn’t get our CKC puppy paperwork until we showed proof that Freyja was spayed.  This is smart on the part of Flying W Farms as they wanted to keep the list of approved breeders small, to reduce the risk of backyard breeders.

You will not find an American Mastiff rescue as it’s in the contract that if you are in a position to not keep your dog, you must offer to surrender your dog back to the breeder you purchased it from. They then try to place them from there with a different family.

Is This Breed Right For You?

An American Mastiff is not for you if:

If you are open to having a massive breed enter your home, that’s headstrong and full of love then an American Mastiff might just be the breed for you.  You have to be aware of what you are bringing into your home as they can be challenging dogs to train and expensive to own.  But there’s few dogs that love as hard as the American Mastiff.

As always, getting proper training and socialization early on is key, and will lead to a much happier life for both you and your pup.