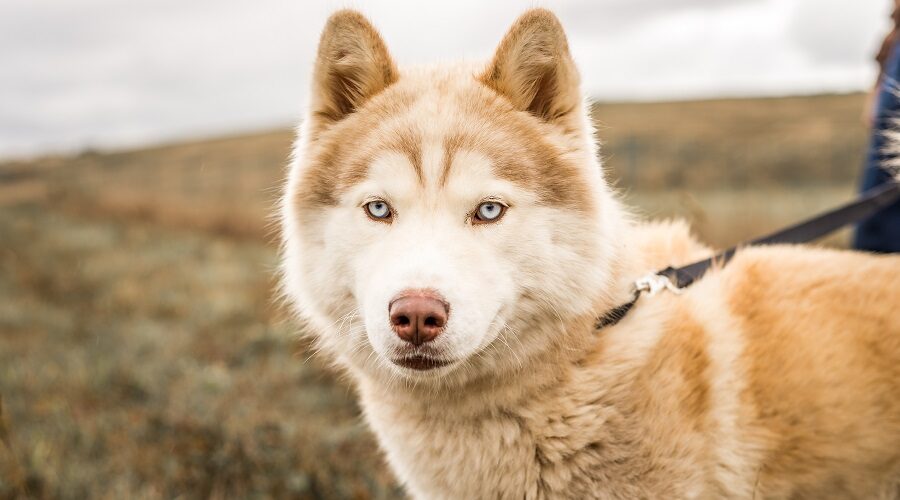 The Alusky is the Malamute and Husky mixed pooch, who is an adorably fluffy pup with a mixture of both calm and playfulness, and one who is protective yet silly. He is a large dog who needs plenty of space, both inside and outside of the family home, and he is an intelligent and energetic pup who needs a lot of mental stimulation and exercise. The Alusky is a great option for those families who can’t decide between his two parents, so let’s find out if he is the one for you!

In order to understand the Alusky in all his fluffy glory, it is important to learn more about his parents. In doing so you can understand a lot more about what you can expect from him in terms of his energy, temperament and size.

The Alaskan Malamute hails from Alaska, and he is an ancient dog breed who was originally bred for his brute strength and power, and he was utilized to pull heavily laden sleds across the ice. In 2020, the American Kennel Club (AKC) has the Malamute as the 58th breed in total ownership and popularity.

The Alaskan Malamute stands 23 to 25 inches tall, from paw to shoulder, and weighs between 75 and 85 pounds. This guy is a lot more protective than the Siberian Husky, and he takes the role of family guardian seriously and he adores his family very much.

The Siberian Husky hails from Siberia, and he is also an ancient dog breed who is slightly smaller and more athletic than the Malamute, and as such he was used for his speed and endurance to transport light goods and persons across large expanses of ice. This is one of the more popular family dog breeds, although not quite in the top 15. in the US and also a very popular parent breed for many different husky mixes.

He stands between 20 and 23 ½ inches tall, and he weighs between 35 and 60 pounds. The Husky is one of the silliest pooches in the canine kingdom, and he always loves to play and make friends. Whilst he is described as outgoing, mischievous and loyal, he is not particularly protective, and would welcome strangers into the family home without a second thought. Because of the Husky’s stunning blue eyes and striking good looks, they are often mixed with other breeds to create other designer dogs. Examples of this include the Pomsky and the Dobsky.

Being a designer pooch who is relatively new on the scene compared to a Goldendoodle (who is the original designer dog), you can’t always be sure as to what characteristics he might inherit from either parent. Whilst you need to be sure that you could live with either parent, below is what you can expect from a typical Alusky.

The Alusky, with good training as a pup, is a well-balanced and polite pooch who will inherit a protective streak but will immediately make the best of friends with visitors as soon as his master welcomes them into the family home. He will make a great watchdog thanks to his natural suspicion and the Husky parent’s talkative nature, so you can count on him to be the estate canine alarm.

He will be a seriously intelligent dog with a lot of energy that will need to be burnt off. For this reason, you will need to provide him with plenty of interactive playtime and brain games, such as puzzle toys, that will keep his mind stimulated. When bored the Alusky will become naughty and destructive, either in the form of digging holes in the backyard or eating your sofa, so do not underestimate how much exercise he needs from you.

This guy will not take himself off to spend time alone, he will demand your constant attention and playtime, so he should be placed with a family that can spend a lot of time with him. Both of his parents are affectionate dogs, and so you can be certain that the Alusky will be too, if not doubly so! And after a long day of working or playing games you can be sure that you’re in for a night of cuddles.

Many dog lovers often find themselves wondering if the Malamute or the Husky are related to the wolf because of their wild looks, and his parents look very similar, often being mistaken for one another. His muzzle will be long, his large eyes almond-shaped, being either bright blue or amber in color, or maybe even one of each.

He will measure between 21 and 24 inches tall, and weigh anywhere between 45 and 75 pounds, and will be a medium to large-sized pooch.

The Alusky’s coat is BIG and fluffy, and there is no escaping his hair! If you are seeking a hypoallergenic dog, or one that doesn’t molt, then this guy is definitely not for you!

Because both of his parents come from the coldest climates on planet Earth, his double coat is thick and dense, water and ice resistant, and it sheds moderately throughout the year. Whilst he can live in hotter states or countries, he won’t necessarily enjoy it, so you need to consider your climate.

Both of his parents have similar colors and coat markings, so it is likely that his coat will be white, with gray, silver, sable, red or blue thrown into the mix. It is also highly likely that he will have the facial mask of both his parents, and odd eye patches that are also common. The color and coat pattern lottery is a game the Alusky genes love to play!

The Alusky will need around 90 minutes of exercise every day in order to keep his large body healthy and his intelligent mind stimulated. This shouldn’t be limited to a long walk around the block, you should mix up his exercise routine with jogging, training sessions, swimming, interactive games such as fetch and agility courses at your local doggy park to name just a few.

He needs to be placed in a home that has room for a medium to large sized dog, so ideally your home or apartment should be slightly larger than average, and he needs access to his own outdoor space that he can roam and play to his heart’s content. The fences need to be reinforced too, because both of his parents are known to dig their way out of enclosures and jump 6-foot fences, especially when bored.

This guy is a pack animal, and whilst he loves to be in the company of other animals, his Malamute genetics can sometimes mean he is less tolerant of other dogs. However, with effective socialization and the sociable Husky influence, he will more often than not happily coexist with other household pets.

He is suited to families with young children, but because of his size you should always supervise him when around children. Be wary of his strength and boisterous energy, but he is known to be very fond of young children and makes a great canine sibling!

The Alusky needs to be socialized very early on, because despite coming from pack animal parentage, he can sometimes be territorial and unsure around other dogs. However, as long as you socialize him with dogs of all shapes and sizes, both inside and outside of his home, you should not have any issues whatsoever.

Because he comes from pack animal parentage, he will crave a strong pack leader in order to feel happy. As his master you must take this role, otherwise he will feel the need to fulfil this role himself which often leads to a whole host of behavioral problems.

It is likely that he will be a stubborn pooch, and so you need to be prepared for a bumpy training ride, however, be consistent and ensure the whole family is on board with his training process, and do not give in! Persistence is the key, and be sure to enroll him into puppy obedience training if he is a head strong pooch.

The Alusky is a very healthy pooch, and he should enjoy a lifespan of 10 to 14 years, which is great considering his large size. He could inherit the health concerns of either parent, so be sure to look out for these common health concerns:

Hip Dysplasia: This is caused by the abnormal formation of the hip joint, which is either inherited from his parents or triggered by rapid bone growth as a puppy. It is painful and can lead to paralysis in later life.

Eye conditions: Both of his parents suffer from a variety of eye concerns such as Cataracts, Corneal Dystrophy and Progressive Retinal Atrophy.

Polyneuropathy: This is a nerve disorder that affects the peripheral nerves across his entire body, and is characterized by weak limbs, exercise intolerance and difficulty breathing.

The Alusky should be fed a high-quality kibble that will keep him sustained throughout his energetic day with a high protein and calorie content. He will consume around 3 to 3 ½ cups of food every day, dependent on his energy levels.

Be sure to feed him a kibble that is specifically designed for large dogs as this will help to control his rapid bone growth. This mix has similar food needs to a Siberian Husky, so matching that breed’s nutrition profile is likely a good thing.

The Alusky should be bathed once every 6 to 8 weeks or so, and because he is a relatively clean breed having picked up good hygiene rituals from his parents, you should avoid bathing him anymore than this so as not to damage his natural coat oils.

His coat, being super thick and fluffy, will need to be brushed 2 to 3 times a week in order to keep it dirt and tangle free. His large ears will need to be cleaned once a week to avoid a buildup of bacteria too. It’s a good idea to wash this mix with an anti-shed shampoo and deshed them regularly.

The average price of an Alusky puppy is typically around $1000 and up.  Because this designer dog is typically a little more rare, they can get even more expensive than this.  With that being said, make sure you check local husky rescues, as this mix is very likely to end up there due to their looks if their owners can’t keep them for any reason.

The Alusky’s popularity as a designer dog is increasing steadily, and whilst he is still relatively rare, you can be sure that there are both good and bad breeders out there.

So, be sure to conduct your research online, look for reviews from other customers and make sure that you meet the pups, their parents and see their health certificates. A reputable breeder will be happy to show you, whereas a bad breeder will not.

Both Huskies and Malamutes often find themselves in rescue centers, simply because owners underestimate just how much exercise and time they need, so you might just have a higher chance of finding one of these guys in your local rescue center.

If not, then check out the Siberian Husky Rescue Site and the Alaskan Malamute Assistance League website as they also care for breed mixes. The websites list dedicated breed rescue centers state by state, along with their contact details.

The Ausky is a beautiful blend of his parents, which is fantastic if you can’t pick between the two breeds because now you don’t have to! He is not suited to every family, and whatever you do, do not underestimate his activity needs.If you think that you can offer him what he needs, you may have just found your newest pack addition!