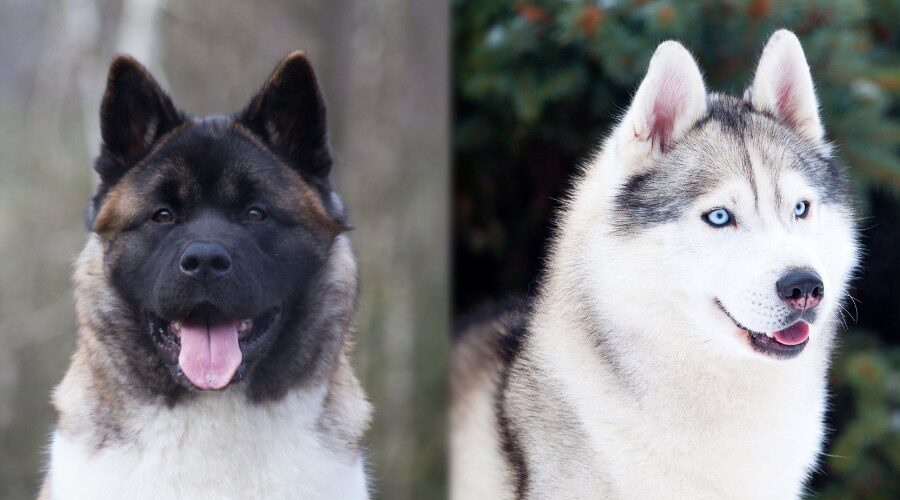 The Akita and the Siberian Husky are very different, with only a few similarities between them.  They may look very similar, but they are two distinctly different breeds with entirely different personalities.

The Akita is a dominant and serious canine, and whilst he loves to have fun with his family, he will always be on guard duty. The Husky is hyperactive and a silly pup who loves to be the center of attention, but he is independent and stubborn and can be more difficult to train than the Akita.

Whilst they both need a firm master, the Akita needs a pack leader that he can look up to, and if he feels that you are not dominant enough then he will most certainly look down on you. Let’s get into the finer details of both breeds.

They have very different histories, but similarly each breed had a famous and heroic pup that made their breed very popular in the mid-20th Century.

The Akita that we know and love today was developed in Japan during the 17th Century. Over several decades, through breeding large and powerful undocumented dogs, the Akita was engineered to hunt wild boar and bears, and everything else in between. Owning an Akita was once only a privilege held by royalty, however, he is now enjoyed the world over by the masses. Akitas hold a special place in Japanese tradition, and they are a symbol of good health, happiness and a long life.

In 1925, a Japanese professor passed away suddenly at work, and that day he failed to return home to his loyal Akita, Hachikō. Hachikō would wait for him every day and accompany his master on his walk back home. Of course, his master failed to return home that day, and Hachikō waited at the same spot every day for 9 years until he became ill himself. So impressed was the famous visiting author Helen Keller by his loyalty and beauty, two Akitas were brought over to America and a breed standard was established in 1939. Soon after this his popularity began, Keller went on to describe Akitas as ‘angels in fur’. They are currently ranked by the American Kennel Club as the 47th most popular breed in America.

The Siberian Husky was developed by the Chukchi Tribe in Russia thousands of years ago. They were designed to be a canine race car, and his profession was to haul light loads over vast expanses of icy terrain, and he did so quickly without tiring easily. Despite the Husky being a working dog, his companionship qualities were also favored, and he has always been a beloved family pet.

Their popularity began in 1925 when a famous Siberian Husky, called Balto, led a pack of dogs who carried a life-saving antidote across 658 miles of frozen terrain. Not only did they save hundreds of lives from a deadly outbreak of Diphtheria, but they did so in just five and a half days. Ever since then the Husky has been a very popular family dog, and he is currently ranked as the 14th most popular breed by the AKC.

The Akita and the Siberian Husky are very different in their appearance. The Akita is the much bigger dog, with males measuring between 26 to 28 inches from paw to shoulder, compared to the Husky who measures much shorter at 21 to 23 ½ inches tall. The Akita is much heavier as well, with males weighing 100 to 130 pounds compared to the Husky who weighs 45 to 65 pounds; at the top end of the scale that makes the Akita double the size.  Many people mistake the Husky for a wolf, but it’s actually the Akita that comes closer in size to them then the Husky does.

The Akita is squarer in comparison to the Husky, who looks much more delicate in his features. The Akita is an extra-large breed whereas the Husky is a medium sized pup. Because the Akita is a giant breed, living space is something to consider as he will take up a lot of room! The Akita’s most distinguishable feature is his curly tail, which looks like the shape of a Catherine wheel firework and is always tightly curled no matter what state he is in. The Husky has a straight brush-like tail which curls up across his back when he is in a state of alertness or excitement.

They are both originally from cold climates, and as such they both have a double coat which gives them their similar fluffy exterior. The Husky is more uniform in his marking and colors, with 9 standard colors, the Akita also has 9 standard colors however he has a wider variety of markings on his coat.  People often mistake the crossbred gerberian shepsky for an Akita as well.

The Akita takes his job as family guardian seriously, whilst he is happy to play and have fun with his family, he is always observing the world around him and ready to protect no matter what. He is suspicious of strangers, and it can take a while for him to accept people into a pack who aren’t immediate family. However, once he has accepted them, you do have a friend for life!

On the other hand, Huskies are not known for being particularly observant, and they rarely actively guard a property or family home. Of course, they are loyal and if they felt their family was in immediate danger they would protect them, but they are such sociable creatures that they don’t have a suspicious bone in their body. So, if you are seeking a guard dog, then the Akita would better suit this role.

The Akita’s protectiveness comes hand in hand with endless love and affection for their family. Despite their hard as nails exterior, they are just as affectionate and loving with their family as the Husky. Both of these guys need a lot of love, attention, snuggles and belly rubs!

It is said that Akita’s can be aggressive with other dogs, particularly those of the same sex. However, many Akita owners say that this tendency is easily removed if the pup is socialized early and is put through disciplined obedience training. Whilst neither the Akita or the Husky are suited to first time owners, the Akita is an intensely dominant dog who, if allowed, will become obnoxious and unruly. If you think that you can combat these issues, then you should not have any worries with animal aggression in either dog.

They are also both very talky canines, especially the Husky. The Akita tends to bark more than the Husky, whereas the Husky barks little but is always howling or ‘talking’. Some find this adorable, some find this tiresome, so this is something that you need to be prepared for if you want to welcome one of these guys into your home.

Both the Akita and the Husky need exercise, and lots of it. The Akita will need around 60 minutes of exercise a day, whereas the Husky will need around 90 minutes a day. Because the Akita is a dominant dog, games whereby authority of power is being challenged, such as tug of war, should not be played. Instead, play fetch and frisbee. Whilst the Akita is not known for his agility, he will happily give an agility course a go as he does love to have fun.

The Husky, being the original sled dog, is built for long distance running and speed, and as such he makes a perfect jogging partner. If this is something that you can’t offer then be sure to take him for long brisk walks, and intense games should be played to burn off that extra energy. Huskies are known to become a bit delirious if they do not get the exercise they need! It’s important to make sure that huskies have the toys they need to keep them occupied as well, so they don’t get into trouble.

Huskies can have their energy levels brought down a bit when they are crossed with other breeds like a pitbull.

The Akita is eager to please and serve his master, and as such he is much easier to train commands, and he tends to learn his commands quicker compared to the Husky. The Husky is a stubborn dog, who, whilst being equally intelligent as the Akita, he doesn’t strive to please his master and is much more independent. This can make training the Husky slightly harder. The best way to counteract this is to keep training sessions short and interesting.

Whilst the Akita picks up commands quicker and is more obedient than the Husky, he has a more complex personality as he is much more dominant, and as such, he needs a strict master who will take the lead. This is a non-negotiable factor, and if you don’t think this is something that you can take on then the Akita is not the breed for you, unless of course you are happy to have an unruly and untrainable canine ruling the roost!

The Akita National Breed Club suggest that the Akita should be tested for the following health issues:

The Siberian Husky National Breed Club suggest that the Husky should be tested for Hip Dysplasia and undergo an Ophthalmologist evaluation like the Akita above.

In addition to the above, the Akita is more prone to suffering from Bloat, which can be serious and life-threatening. The Husky has a longer lifespan compared to the Akita by a few years, and although the Akita is generally healthy, the Husky is one of the healthiest dogs around. As with any dog, if you are considering getting either one of these then be sure to do thorough research into their health and what symptoms to be aware of.

The Akita will eat around 4 cups of food a day, whereas the Siberian Husky will eat slightly less at around 3 cups of food a day. Although the Husky is much smaller than the Akita, he is much more energetic and has a much higher metabolism, and as such he will not put on weight as fast as the Akita.

They will both need age appropriate food, however, some Veterinarians will say that after the age of 7, the Akita should be fed low calorific food so to avoid kidney diseases that he is often prone to.

Both the Akita and the Siberian Husky are relatively easy to care for when it comes to their grooming. They both need brushing 2 to 3 times a week, which will turn into once a day during shedding season, or when the months begin to get warmer. The only thing to be aware of is that they are both heavy shedders, particularly the Akita, and so you will need to up the vacuuming schedule, and invest in a lot of lint rollers!

The Akita and the Siberian Husky also tend to find themselves in adoption centers more so than the average pooch, and this is simply because the owner underestimated how intense and energetic these guys are. So, if you are thinking about rescuing an Akita, then the Akita Club of America has listed several dedicated rescue centers, and the Siberian Husky of America Trust also lists dedicated rescue centers state by state.

They are both fun and energetic dogs, who will give you plenty of unforgettable memories. The Akita’s personality is more intense and complex, and as such his training will be a lifetime commitment. The Husky is more energetic and hyper, but despite being stubborn he is doesn’t require as much of an experienced owner.

So, whether you prefer a Hachikō or a Balto, as long as they sound like they could fit well into your life and you can give them what they need, they are both equally as rewarding and lovable pups.